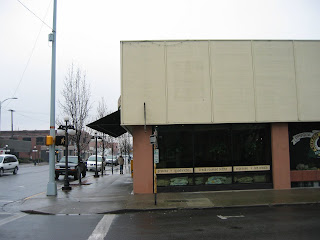 So, they took a novel approach. They decided to help property owners pay for facade improvements, offering matching grants of up to $37,500 per lot for qualified projects. I was lucky enough to end up as the project designer, participating in more than 75 separate renovations over a five year period (you have to understand that there are only 200 properties in downtown). Many of those were simple paint, awning or signage but some were major projects, including two Certified Rehabilitation's and many more that took advantage of the Special Assessment program the State of Oregon offers. Most though, including the Southern Oregon Gas Company Building, shown here "before" and "after" simply involved chipping away at the accreted ugly of the decades, taking off 1940s stucco or 1950s-1960s metal that covered up the original facade (or at least the one that had pedestrian scale windows and detailing). There is hardly a block in the city that hasn’t been touched by the Facade Grant program in one way or another.
Two years ago MURA ran out of funding for this program, diverting its efforts elsewhere. This year, funding is back in place and, as of last week, I am lucky enough to be involved in the project again. We already have FOUR projects either formally enrolled in the process or soon to be. Hopefully that pent up interest will continue. You can read more about the project, and see more before and after photos, at the MURA website
http://www.downtownmedford.com/mura/accomplishments/historic_district_facade_grant_program/
Posted by G. Kramer at 2:53 PM