Moving on to happier subjects, last week the rehabilitation of the McAndrews-Barnum Block in Medford began, as these things usually do, by removing the nasty alterations of some previous era. In this case it was the 1970s, a projecting green Darth Vader-style hood. We struck signage! Actually we struck a painted wall graphic, proclaiming the site as the location of "W.A. Kinney," or at least Mr. Kinney's unknown establishment. 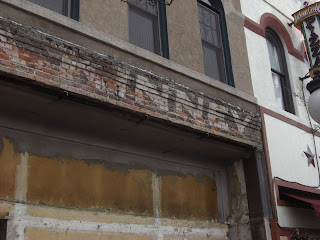 Signs like this, those that keep reappearing, are known as Ghost Signs. Usually that refers to their reappearance, no matter how many layers of paint applied over them,  as the result of the incredibe durability of White Zinc-based (er, lead) paint).  Old signs in particular (all signs in particular) use a very high quality paint material and so they survive for decade after decade, below inferior product that weathers away. When old signs are in favor (as is recently the case) ghost signs sometimes get a little help, as in a sign in Jacksonville, Oregon that benefited from the occasional tooth brush removal of its covering layer (but that's another story).

Nobody seems to be able to figure out what Mr. Kinney was selling on Main Street in downtown Medford but, from the look of the sign, I would venture that he was doing so around 1900. No person of that name shows in the 1910 city directory so Kinney's sign has certainly hung around far longer than the business it advertised.

We probably can't leave the sign exposed as part of this project but we will be sure to encapsulate it in a way that will allow the next remodelers of the McAndrews-Barnum Block to enjoy a small discovery too. Mr. Kinney's sign isn't bothering anyone, and we can let it go back into hiding to reappear and surprise somebody else in fifty years.  In the meantime it's sort of fun to see how merchants hawked their wares in the pre-electric era. 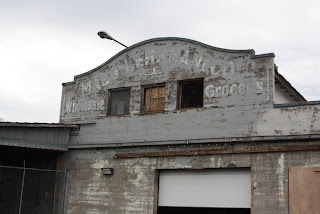 Last month another project, the Cooley-Neff Warehouse, also struck "sign."  This one, I hope, will remain exposed.  It announces the building as the home of "Mason-Erhman Co.   Wholesale Grocers."  They were the first occupants of the building, in the mid-1920s.
Posted by G. Kramer at 7:26 AM