“Beautility” is a word that appears to have been coined sometime in the 1950s, recognizing the productive marriage that was possible when things were both  attractive and functional.  I first came across the term doing work for the Bonneville Power Administration, BPA.  In the early 1960s BPA, having come to the realization that not everybody saw their transmission lines and substations as works of art, hired a noted Portland, Oregon architectural firm to help them come up with a better design model that would be, well, be-utiliful.  “Beautility" is what Stanton, Boles, Maguire and Church called their approach, published in that summer-blockbuster A Report on Appearance Planning for BPA, released in May 1966.  This is a sketch from that hard to find report.  I found mine at Powell's (and for just $5 too!)

BPA’s Beautility actually made waves in the electric utility world and there were numerous requests for the report during the late 1960s and early 1970s.  BPA took the advice to heart and looking at their control houses, and transmission lines, and substations, the educated eye can easily discern the impact the report had.  Today, as most of those 1960s-1970s era buildings near five decades of service, they are all potentially historic, despite their sometimes space-age design.  “Beautility,” like other works of so-called Mid-Century Modern design, is just now coming into its own.  I think some, like BPA's buildings at the Ceilio Converter Station, show below, already have. 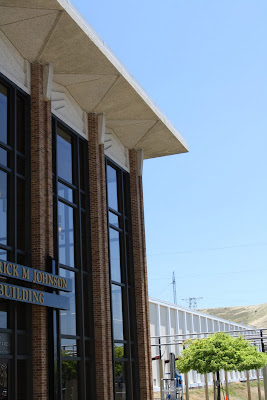 Beautility isn’t everyone’s cup of tea, nor is it frequently what the average person conjures to mind as historic.  We’ll leave alone that electric transmission infrastructure isn’t what the average person often conjures to mind as historic either, other than to mention that you might try to imagine the Pacific Northwest (or anywhere) without it.  "Historic" and stunning architecture aren't synonyms and never were.

I am starting to work on a late Beautility period project for BPA…one clad in colorful panels that surely screams late 1960s.  While I am somewhat disappointed to learn that Stanton et al simply borrowed the term from somebody else, I am pleased to see the use of the word continues (though mostly for hair salons and grooming, according to Google.  Even Nike has a line of clothes under that term).  Still it seems there are few places where "Beautility" could be more appropriate than at BPA which is, after all, what most people consider to be a “Utility.”  One that during the 1960s made an effort toward beauty wherever it could.
Posted by G. Kramer at 10:56 AM