Why did they do that? 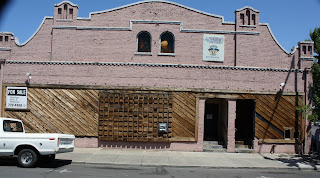 Sometimes it seems to me that as a preservation consultant, particularly working in some communities, my job involves planning for what to do after we “take that garbage off” of the building façade. Of course that begs the question of “what were they thinking?” when they put it up. Most times de-garbagifcation is pretty easy, and there is occasionally the fine surprise (like leaded glass windows below a sheet metal façade on one project) that makes everyone one the project scurry and regroup to redesign. Most of the time, however, on the day of the big "unveiling," you just discover an ugly hole, or a shoddy patch-job where the windows (doors, whatever) used to be. It really seems sometimes that earlier owners and the contractors were bound and determined to remove any vestige of grace or character from their building as quickly, and completely, as possible.

In downtown Medford, a successful community for many years where merchants and property owners serially renovated their building facades to keep up with the times, there are plenty of great buildings hidden by plenty of garbage. In years past, when I was the design consultant for the Medford Urban Renewal Agency (MURA), I got pretty good and removing the 1960s (or 1980s) from a façade and finding some way to reinterpret (or rediscover) the 1920s (or 1930s) underneath. For the past few days I’ve been staring at current and historic images of the 1911 Crater Lake Garage building, one of the few surviving brick auto-garages along what southern Oregon fancied as Medford’s “Auto Row.” The poor building has been hidden behind really terrible 1980s wooden screens that cover the (unfortunately) long-lost windows. Whomever put these up, made as they are of exposed end-grain Fir, must not have realized that this is Oregon, western Oregon in particular, where we are know to get the occasional rainstorm.

Originally the Crater Lake Garage had large service doors, modified after 1922 to create typical storefronts. While the building has been modified, and while the front entry to the proposed restaurant use will actually be on what was historically the rear (facing a large public parking lot), we’ll come up with something to make this elevation more attractive. New owners, new paint, and half a dozen windows in what are now blocked in openings will return life to this building and once again get natural daylight to the interior. A modest change, but one that should have big impact on downtown Medford.
Posted by G. Kramer at 8:07 AM