A while ago I wrote about our efforts to save the Greyhound Portal, a portion of the former Pacific Greyhound bus terminal in downtown Medford Portall.  It was to be restored as a feature in Park Block #2, of the Medford Commons project, surrounding the Lithia Motors HQ. MURA, the Medford Urban Renewal Agency had proposed saving the portal, and then last October changed its mind, setting in motion a long series of complicated public process that involved the Landmarks and Historic Preservation Commission, the Arts Commission, MURA and the City Council.  Well, in the end, the MURA Board decided the best thing to do was just go ahead with their original plan.  Earlier this month they voted 7-1 to retract their request for demolition, saving the portal and assuring its restoration.  We are thrilled. 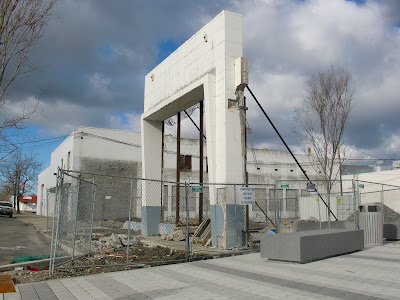 And we aren’t the only ones, apparently.  Last week an anonymous donor stepped forward.  He had secured the original “GREYHOUND” lettering when the depot was shuttered in 2008 and has kept the sign since.  Now that the City  agreed to keep the portal, he donated them back.  We picked the sign up yesterday. 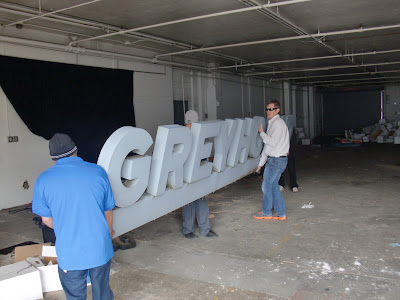 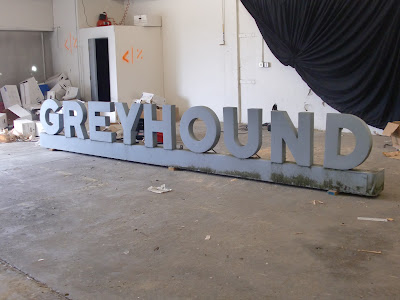 The letters, about 19 feet long and 30” tall, are in excellent condition, considering they are 65 years old and have been sitting on the ground for four years.  No dings, the original mill-finish is in excellent shape under a few coats of easily removable paint.  The chase, at the bottom, originally held two tubes of neon, that would backlight the letters at night.  Even if we can’t find the budget to do that now, we’ll be sure and build the opportunity to get power back to the sign, and do so in the future!
Posted by G. Kramer at 7:56 AM