Today, listening to the local NPR affiliate, I heard a "sponsor announcement" from a local construction firm that boasts it offers designs in, among other things, the "Greene and Greene Style." Being somewhat familiar with the work of Pasadena brothers Charles and Henry Greene, I was amused.

The Greenes developed a practice in southern California in the early years of the 20th century that quickly established a reputation for fine integration of materials and site to create a nearly natural style of architecture. The best of their homes, the most famous of which is the Gamble House, now a museum owned by USC, is essentially a piece of furniture that you live in, so fine is its construction and detail. Walnut, Maple and other fine wood built-in cabinetry, walls and flooring are surrounded by a sprawling wing-swept structure with detailed shingle work, stonework and other materials that harmonize with the environment. Custom built doors, light fixtures, even textiles and furnishings are found throughout, creating what some have called "the ultimate bungalow." In fact the AIA gave the Greene's a prized Gold Medal in the 1950s that essentially dubbed them the instigators of the entire bungalow movement. 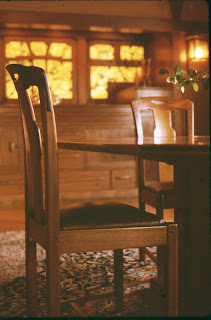 Charles Greene, in particular, was legendarily detail oriented. Stories abound of his getting down in the muck with the masons, guiding the placement of every single foundation or porch pier stone to assure the best effect, of choosing the wood for door trim to take best advantage of the grain, and of demanding that work not up to his high standards be removed and redone (you can do things like that when you are working for the Gambles, of Proctor and Gamble fame).

There have been houses in Ashland before labeled as "Homage to Greene and Greene" and while they are nice enough houses, they basically amount to standard homes with shingle siding and some river rock, perhaps a fine stained glass door and some high priced, but still stock, exterior lighting. In any event there is not, in my mind, any such thing as the "Greene and Greene" style unless that style is the incredible use of imagination and care in building a custom home. I rather doubt that whatever is being represented as such is work the Brothers Greene would recognize as their own.
Posted by G. Kramer at 8:36 AM