In the past few years I’ve suddenly learned more about fountains, and plumbing, and restoring the combination of the two for public installations than I ever expected. First Ashland’s Lithia Water Fountain, installed on the Plaza, at the head of Lithia Park had fallen upon hard times and the City hired John Galbraith, a landscape architect in Medford, and I to figure out what to do it. That project, which involved far more complications than anyone envisioned was ultimately completed, the fountain restored with new basins that replicated the original character and an interpretative panel to tell the “drinking public” the story of Lithia Water and its supposed medicinal properties (ignoring the sulfur smell and taste). 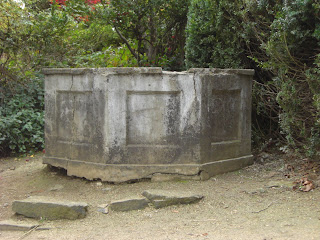 More recently, working first with landscape architect Laurie Sager and now directly with the City, I’ve gotten involved with the on-going restoration of what is at least the second Peter Britt fountain, located on the Britt Festival grounds, in Jacksonville. Peter Britt was quite the horticulturist and not only was responsible for introducing many plant types to southern Oregon (including the region’s first wine grapes) but maintained his own grounds as something like a park. The second Britt Fountain is a poured-in-place concrete basin about 6 feet in diameter and 36” height, with fine recessed panels forming a octagonal basin. Historic images (I think that is Mollie and Emil, Peter’s children. Emil was the Mayor of Jacksonville for most of the first half of the 20th century) show the fountain with a simple standpipe. We don’t know for sure, but it probably was just pressure fed and drained out into the garden. 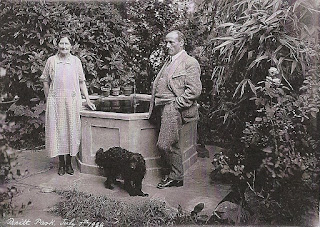 At some point the fountain use ended and the basin was filled with soil and used as a planter. I can remember standing in line for Britt shows when the pansies were in bloom (As my wife will tell you I am horrible at identifying plants…I think they were pansies but they could have been tulips for all I know. They were colored flowers, okay?). Caged soil and concrete aren’t a great match and, eventually, the steel drain pipes rusted and began to force full-height cracks through some of the concrete panels. Other areas, particularly the projecting sill and the base (the concrete pad around the base has been removed) spalled and show significant damage. Eventually somebody realized watering the plants wasn’t helping and took them out.  For the past few years the Britt Fountain has been a large pot of dirt, sprouting a few airborne weeds but nothing much else.


Earlier this year Sager and Associates designed a major renovation of this portion of the Britt Grounds (including a very cool steel superstructure that will help interpret the Britt House, which burned many years ago). The City has funding to restore the fountain, which will include restoration and repair of the concrete, installation of a new pump and a single standpipe spray. To control damage we are looking at internal supports and the installation of a stainless steel “basin” (you can’t have a 36” deep pool of water in a public park due to liability issues) that will fit carefully inside the concrete. I like to think that Mollie and Emil would be pleased.
Posted by G. Kramer at 8:24 AM No comments: