In 2000 the voters of Jackson County, Oregon approved a $38.9 million dollar bond to fund the construction and renovation of its 14 branch libraries, a process that resulted in the construction of an entirely new library in Medford.  When the library moved out of its 1911 Carnegie Library, located in Library Park, the building reverted to the City who didn’t know what to do with it.  After a certain amount of hand-wringing that included serious consideration of selling the building for private development, a new Mayor, Gary Wheeler, took office and took the bull by the horns.  Mayor Wheeler established a library committee of concerned citizens and chaired it himself.  The NTHP, the Kinsman Foundation, and Medford’s Urban Renewal District all provided funding to help and a new plan was hatched: to transform the building into a multi-use community center while respecting and honoring its history.
About a year ago, after some work on the library had occurred when it was used as a temporary home for City offices during a city hall remodel, Medford received significant Federal stimulus funding to improve energy efficiency at the Carnegie, a process that resulted in all new HVAC and, as I have written before, all new windows.  While there were parts of that program that could have been handled differently, the funding source triggered Section 106 and required the City to not only replace the windows as consistently with their original character as possible but to mitigate the Adverse Effect caused by their removal. Working with Oregon SHPO to develop appropriate mitigation, the City elected to restore the front entry, replacing the bad aluminum doors with custom Fir doors modeled after the historic design, restoring the twin cast iron lampposts, and cleaning the brick, all to provide the public with a hint of what a restored Carnegie would look like.
And then, as so often happens once preservation effort starts, the City got inspired.  They found some funding to clean up the interior, including new commercial carpeting, new paint, repaired lighting, and other work that makes the Carnegie presentable and more importantly useable for meetings, weddings, community events and other functions.  Rental fees will help build toward a full restoration of the building as the Carnegie Library Committee planned but more importantly, even if not complete, the City’s vision returns the Carnegie to activity and utility in Medford after eight long vacant years. 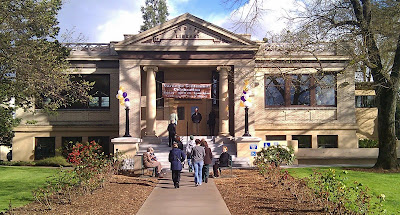 Last night Mayor Wheeler and the members of the Carnegie Committee, along with the City’s Parks staff, Council, the local AIA (which donated time to help plan the project), former Mayors, and other dignitaries and supporters all joined together for a grand celebration to re-open the Carnegie.  A banner was hung, cookies and punch were served, photos and newspapers articles about the Carnegie’s history lined the newly painted walls, the author of the City's newly published Images of America history book signed copies and we all sat in the Carnegie Library and enjoyed the premiere of a video made to honor Medford’s 125th Birthday as an incorporated city.  Well Done!
Posted by G. Kramer at 7:37 AM No comments:

Years ago, as a student at the UO, I wrote a paper on the growth of a local auto dealer and their process of demolishing dozens of buildings for new car lots in downtown Medford.  In my always tongue and cheek style, that paper was titled “There’s Plenty of Parking in Downtown.”  In the years since the Medford Urban Renewal Agency, at the behest of local merchants, have taken up that mantra and built two parking structures and several surface lots that collectively occupy four or five full city blocks.  That doing so reduces the tax base (which pays the increment in the renewal district) is fodder for some other post.
Yet still, there are those in downtown Medford who are convinced that it is lack of parking, and lack of parking alone, that causes stress for local merchants and business.  I think that is backward.  Having a parking “problem” is not demonstrated by a prospective customer having to drive a block or two out of their way to find an available space.  A parking problem is evidenced by having too much parking, and too little need.  Extrapolated out to the absurd, lots of available parking (be it asphalt or of the other variety) almost by definition means there is no commercial draw, no reason to go to the area and park your car, because there isn’t anything there you want to experience. THAT is parking problem.

Here are four views taken a 5:00 last evening, Saturday, on 6th street, right in front of the proposed restoration of the Holly Theatre.  One of the TWO parked cars is mine.   I’m not seeing a big issue.(If you click on the photos to enlarge them I don't think you'll see any issue either) 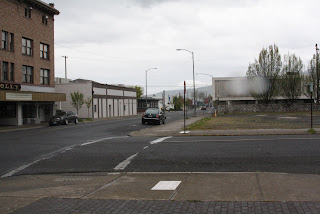 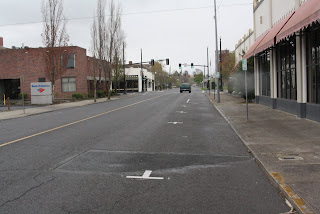 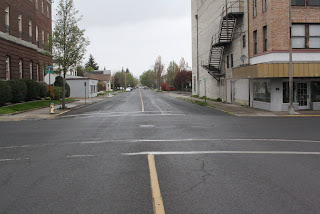 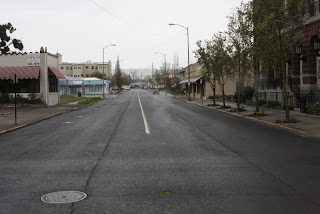 On the other side of public investment, Medford has a plethora of parks, Alba Park, Vogel Park and just across Bear Creek, Hawthorne Park.  On Friday Lithia Motors broke ground on the Commons project, which will include two full blocks of public park (even more land taken off the tax rolls, but again that is another post).  I have long felt that while the Lithia HQ will be a fine addition to downtown, the inclusion of two more parks is a mistake.  At least, as I understand it, the City and Lithia have stepped back from building yet another parking structure as a part of the Commons.Thank goodness.
Downtown Medford is blessed with a surprising number of fine restaurants-Porters, Elements, Four Daughters, Habaneros and many more.  It has a viable performing arts center, the Craterian, and now there is the opportunity for the restored Holly and now a small community theatre to be located in a long-vacant warehouse.  The Carnegie Library is to be restored for public meetings and gatherings and, at the other end of Main Street, there's talk of relocating a historic home to Hawthorne Park for use as a another community center/museum/gallery  Those sorts of uses, offering a huge increase in night-time activity in downtown, not only support local restaurants and merchants, but may actually create enough demand that new visitors will take advantage of all of the parking the city already has.
Posted by G. Kramer at 8:36 AM 3 comments:

The two Ionic columns found buried beneath stucco and brick at the Sparta Building, reported upon in an earlier post, turned out to have more damage to them than we'd hoped.  The capitals were largely chiseled away, to create a flat profile (we knew that), but there was considerable damage to the plinths (the bases) and the characteristic fluting as well, where earlier renovations had attempted to use the columns to support door frames and structure. 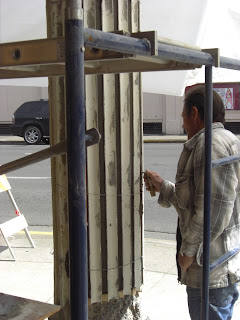 We'll repair, actually replace, the capitals with metal elements from W.F. Norman, the "restorer's friend" (I use W. F. Norman a lot!).  For the plinths and the fluting we are lucky to have found a skilled craftsman who is manually recreating the elements, using layers and layers of high-density cement before coating the entire surface with white cement, to create the proper finish.  One aspect, the forms that he's created to match the fluting perfectly, is a great example of in-the-field innovation.  Turns out that 2" PVC pipe, split in half, and banded together around the surviving flutes,  creates a perfect mold.  Way to go, Frank! 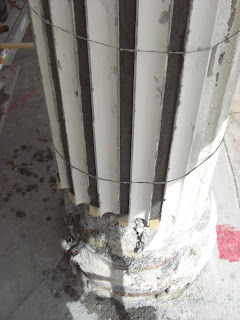 Occasionally I am asked to review a planning application for this or that municipal client, typically when there is something non-standard about the proposal or they are not certain about how to react.  Sometimes I think I just am being asked to play the heavy, to provide language that is more polite than “What the %*^%$ are they thinking?” and perhaps provide some re-direction.  It is always an interesting experience.

I think that preservationists sometimes need to work a little harder to remember that no one sits down at the drawing board with the idea of “How do I really ruin this historic property” in the forefront of their mind.  Those property owners that are reaching for their wallet are, no matter how misguided, still following a laudable impulse - to invest in their building with the intent of improving it, making it more attractive, secure, functional, or whatever.  That’s a good thing and one that should be nurtured, not squashed. 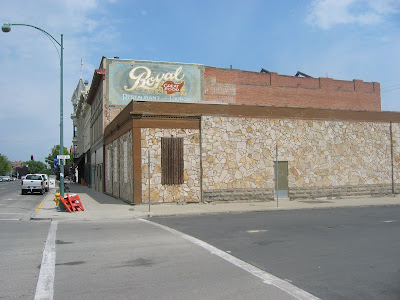 Admittedly there are times when that impulse is so misdirected it is hard not to castigate anyone who proposes it.  Those are often the applications sent my way.  And often what the applicant is attempting (improved access, greater sense of entry) is a really good idea...it is just the proposed execution that fails.  Turning that around, educating them without making them feel stupid, isn’t always easy, but I try hard to see these situations as opportunities.  It isn’t really that difficult to do the right thing by a historic building, if you know what the right thing is and know that there are other sources of supply beside Home Depot and Lowes.
Posted by G. Kramer at 8:09 AM No comments: