Here in Jackson County we once boasted the largest local historical society west of the Mississippi River. Fifty years ago visionary County leaders petitioned the Oregon Legislature to change state law and create the opportunity for a local Historical Levy. They did, and in 1948 the voters passed the Jackson County Historical Levy, designated .25 per thousand dollars of assessed value to support the restoration of the old Jacksonville Courthouse for use as a county museum. The Southern Oregon Historical Society was formed to run that facility, along with others the County would eventually own in Jacksonville through generous donation from Robbie Collins, the Beekman Family, Pacific Power, and the University of Oregon. The US Hotel and other facilities came to the County during the Great Depression, for failure to pay their taxes and in Jacksonville's sorry economy before it discovered the value of history the County saw no point in selling them.


Fast forward and Jacksonville's special qualities were recognized as an NHL in 1966. SOHS grew into a fine, professional institution with more than 50 employees, conserving more than a million artifacts, providing training and advice to the bevy of local historical societies their success spawned throughout Jackson County (we have twelve). SOHS events played an important role in tourism, and brought considerable value to the region. So generous had Jackson County voters been that the Society never had to collect the full .25  cents. Just a dime per thousand brought them well over $1 million annually.


Enter politics, in the very specific name of Jack Walker, a long time County Commissioner who despite being a Jackson County native has a near innate distaste for everything SOHS stands for. Buoyed by his own opinions, Jack started to nibble away at SOHS funding, first diverting 25% of it toward the remaining historical societies and the County's own projects. Later, with a convenient interpretation of Oregon's tax cutting ballot measures, Jack and the County took the position that the Historical Levy no longer existed  as a dedicated fund.  Now the full .25 cents could be diverted to the County's general fund and, of course, they didn't hesitate to collect the entire quarter the levy was entitled too. That levy still yields the Jackson County general fund NINE MILLION annually.  Jack uses it to pay for things he values more than heritage or libraries.


Last night SOHS sponsored a public meeting to discuss its future. Anybody that follows SOHS locally already knows that they are in dire straits. Poor management in the past, coupled with lack of gumption or out and out poor decisions by previous leadership put the organization in such a deep hole that even their current, dedicated, board is hard pressed to find a solution. This isn't helped by the fact that Jackson County, lead by Jack Walker, has basically behaved like a school yard bully picking on the nerdy kid. In the words of a rare letter to the editor on this topic "The near dereliction of duty demonstrated by the commissioners is an outrage and should not be tolerated by citizens of southern Oregon." Well said, but not said nearly enough.


At this writing, SOHS is scared silent and is seeking to leave all of its responsibilities for Jacksonville properties to others.  They are working with the "Jacksonville Historical Society", a new group that hopes to take over the Courthouse, Beekman Bank, Beekman House, Children's Museum and Catholic Rectory. The silent part comes from the fact that SOHS is negotiating with the County in the hopes  they will sell the US Hotel to a private investor and give SOHS some of the proceeds to pay off debt  and provide operating funds while the society gets its sea legs under a new, streamlined, business model. I wish them luck. They are going to need it. I think they are deluded to trust Jack Walker to do the right thing in regards to SOHS. He never has. Bullies, when they have their victim on the ropes, are fairly unlikely to show them any mercy. It's a sorry state of affairs.  The county will keep the lions share of any money they get from selling these historic properties if there is any way they can finagle it.


And meanwhile Jack and the County not only collect RENT on the US Hotel (which they don't share with SOHS which must maintain the building under the terms of the lease) but they continue to blithely collect nine million dollars from taxpayers every year.
Posted by G. Kramer at 1:41 PM 1 comment:

Last week I was in Portland, attending the first of HPLO’s “Round Tables” on historic preservation. HPLO (the Historic Preservation League of Oregon) brought us together to discuss how Oregon can better support and benefit from its 116 National Register listed historic districts and how those districts can remain, or become, more vital. It was an interesting event.
Historic districts are important collections of buildings but, as my old school buddy Dave Skilton politely reminded the assembled, it’s the National Register of Historic PLACES, not historic buildings. I agree. Those of us that work in and with historic districts in particular need to be continually reminded of the value of the collective. Unfortunately the way land use law works means that almost all preservation regulations are set up to deal with building-by-building proposals and so it's pretty easy for the larger philosophical issues to get lost in the trees. Or the windows and paint colors. That lack of larger vision for the district as a whole is further challenged by lack of an articulate, consistent, vision or goals to guide a district’s development.  Even when such goals exist, other forces such as changes in political leadership, staff, or simple economics make consistent implementation difficult.  As a result, focusing on paint color or windows or other  manageable  elements becomes an easy default position.

I'm not sure that detail focus is always the best, or the one that gets HP where I think it should be heading.  As I have often said, in more contexts than would seem appropriate, “We are doing this WHY, exactly?” By which I mean what is the real point, the real benefit, of historic preservation (and if you answered “to save our architectural heritage” please see me after class for additional reading). Preserving old buildings just to say you have isn’t a particularly self-sustaining activity in my opinion and it surely doesn't represent preservation at its finest. 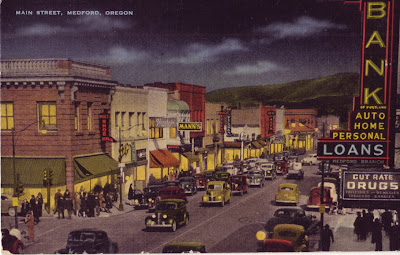 I am always struck by old postcards of downtown. Of course the buildings and the architecture  are of interest, but what strikes me, and what most other people notice first, is all the street activity. There are PEOPLE everywhere. As our field changes I think PRESERVATION is going to have to come to grips with the reality that in all but a few exceptional situations the most valuable aspect our unique approach to the built environment, is our ability to enhance the strength of PLACE.  Good preservation focuses upon buildings, but it uses them to support improved community. It’s not really that complex, is it? 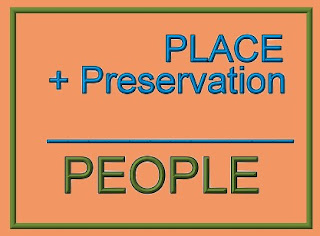 I realize this is borderline heresy but it’s just not always about the buildings. It should be about the fact that historic places engender PLACE so successfully. Yes, of course, historic preservation has and always should retain a strong connection to architecture, through scale, materials, quality of design, sustainability and all the rest but I am of the unwavering opinion that community is the endgame. The buildings are just a proven path toward success in that game. It's a viewpoint more tied to a flexible Rehab model than a stringent Preservation model.
The philosophical underpinnings of our profession and the process we work under have moved significantly away from what I used to disdainfully dub “dentil counting.” But there is much more to do when a few minor interior or exterior changes can be still be seen as intolerable desecration. I believe that if preservation is to remain vital and shed its often deserved reputation as a scold, we need to seriously rethink the legal framework, including both regulation and incentive, we operate under.
My next missive may be on the Secretary’s Standards and the interpretation thereof. Won’t that be fun.
Posted by G. Kramer at 9:34 AM No comments:

Yes, Virginia, utilities can be historic too....

Lately I have been back to staring at my computer screen, and at images, of T-lines, Control Houses, Switchyards, Radio Stations and the various other pieces of the multi-state, thousands-of-miles long, Bonneville Power Administration Transmission System, all as part of wrapping up a draft cover document for a Multiple Property Submittal.  Documenting the history and significance of BPA to the Pacific Northwest has become rather second nature, but it's still a good story.  Now, by tying that story to the built resources that BPA manages, we’re breaking new ground, at least as concerns BPA’s development after 1945 and the end of its first “Period of Significance.”  That has got me thinking about electricity, hydropower, and all the work that I’ve done over the years for PGE, PacifiCorp, EWEB and others, now including BPA, who operate the sinuous network of lines that ties them all together, in one way or another.

Starting out in preservation my experience and understanding of electrical generation pretty much stopped at expecting the local utility to supply the power for my computer and cursing them out in those rare instances when their system was down.  Over the years, having worked for most of the larger (and many of the smaller) utilities in Oregon, I have gained not only an understanding of just how complex the system that ends at a duplex receptacle really is, but an appreciation for the engineers and others that put it all together over the past century.  I think people forget that here in the Northwest electricity didn’t really exist until the late 19th century and for many cities, and more rural areas, reliable, affordable, power is a post-WWII arrival.  There is a huge system of dams, and thermal plants, and now more and more “green” generation plants that chug away out of view to keep it so.

That's the Copco Dam, above.  It's scheduled for removal, if all the competing parties on the Klamath River can figure out who pays for it.  The Klamath Dams, like most early 20th century dam despite their recent bad press, are pretty incredible constructs.  Some engineer looked at a canyon a century ago and said “There.”  In the case of Copco, that engineer was John Christie Boyle, a fascinating, near Rennassiance-type, guy born in the tiny northern California town of Ft. Jones.  Directed by guys like Boyle, (or T.W. Sullivan, or J.D. Ross, or any number of other visionary leaders), workers with horses and, if they were lucky, steam engines, moved rock, and poured concrete and changed the course of the river to produce hydropower, still the most reliable form of energy production around.  Ever since, when the water flows, the turbines spin, and you get power out the other end.  Most dams, and much of the generation equipment within them, still rely on 19th century technology in large part, simply because the technology is so simple there is little beyond improved control and fish passage that can be done to improve it. It is fashionable now to think of dams as "fish killers" that should be removed and replaced with wind turbines or solar arrays.  There are problems with that, if you like knowing that when you flick a switch there will be power to it, no matter the season.  Nothing, as usual, is as simple as the advertising copy.

The picture below, of the T.W. Sullivan Power House, operated by PGE at West Linn, produces some 16mW of clean, non-greenhouse gas producing, electricity.  Sullivan began life as “Station B,” built by the Willamette Falls Electric Company in 1893.  It is the second oldest continuously operated hydroelectric powerhouse in the country. I can't speak for others, but I am rather glad its still in operation. 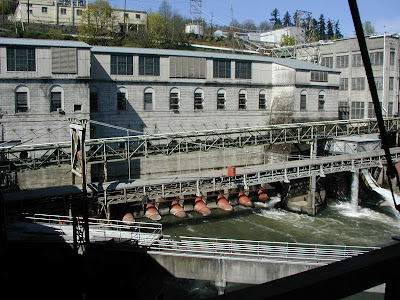