I have written before about the great things that are happening in downtown Medford, what with the restoration of the Sparta Building, the on-going Facade projects, and the planned rehab of two long vacant buildings by Jefferson Public Radio.
I have also written about the city’s unfortunate penchant for “Silver Bullet-itis,” as most recently exemplified by a $14 million public investment in “The Commons,” a multi-block stock urban renewal project built around a new 4-story HQ building for Lithia Motors.  That project, which is finally scheduled to start construction later this spring after a two-year delay, has been much in the news lately.  And, as is my wont, and occasional failing, I have not been shy about voicing my opinions about its potential for improving downtown Medford.
The Commons includes the demolition of eight buildings to clear the land, two of which are clearly historic (and one of which, the Littrell Auto Parts Building that was recognized for its renovation just a few years ago by the Medford LHPC).  Lithia, toward whom I hold no ill will, should stay downtown and I don’t blame them for consolidating their offices into one structure.  I might quibble with the design (which is fairly aluminum and car-dealery for downtown IMHO), but it is just a building.  The problem, of course, is that Medford (and Lithia) can’t help but see this mega-project as the mega-answer to an entire host of downtown issues (hence the loss of eight buildings).  Two new blocks of hardscape park will either be virtual wastelands (my guess), or will be so attractive that they suck the slowly renewing life out of the rest of downtown (apparently the City and Lithia’s expectation).
Downtowns, as the perceptive Jane Jacobs told us, are rarely improved by tearing them down and, having done so, it is very difficult to create a great place out of whole cloth.  Those obvious, and fairly accepted, rules appear to have little effect on a certain segment of downtown Medford, Oregon.
Many years ago I was a part of a design team in downtown Medford that was pulled together right after the city’s Urban Renewal Agency had invested $7 million in southern Oregon’s first “Parking Structure.”  Don Rypkema, who was also a part of that team, pointed out (wisely) that instead of building a parking structure (which is STILL largely underused), Medford could have instead purchased EVERY single vacant building in downtown and given it to somebody who agreed to open a business there.  15 years later Medford has yet another parking structure ($8 million, I think), and about half a dozen new surface parking lots, many largely vacant, particularly after the community college closes down for the night.  Oh, and lots of vacant buildings.  Are we learning yet?  Apparently not.
Posted by G. Kramer at 9:27 AM No comments:

For the first time in several years I am working a group of National Register nominations, the formal documentation that we use to “List” a property as historically significant as opposed to the more internal “Determinations of Eligibility” that generally suffice for what is termed compliance work.  DOEs, which are quicker to write and review, are what agencies and regulated entities prepare as part of their Section 106 process.  It used to be that the only time you actually “listed” a property was when a private party wanted to secure the various tax benefits available for “listed” resources, or when a city was seeking formal National Register designation of a district.  NR documentation isn’t all that different than a DOE, though it has usually been expected to be a little more detailed and formalized.  Now, it appears that the DOE process and the NR process are merging a bit, toward simpler, shorter, reports.
Back in the day NR nominations were shockingly brief if not downright terse, often topping out at ten pages including maps and graphics.  When I was writing lots of these, in the 1980s and 1990s, they had expanded into a detailed narrative that often included scads of local history if for no other reason than a nomination was obligated to develop a context if it was making the claim that a particular building or property was significant within it.  I like to think that nominations from this period serve as valuable sources of information on the historic development of many small towns, or industries that would not otherwise be very well understood.  I mean if I was interested in the Walnut industry in southern Oregon during the pre-WWI period, I sure know where I would turn for information.
Well, apparently, NPS and perhaps the SHPOs too, have grown tired of lengthy history and are embarking on an effort to streamline the nomination process, perhaps so that more property owners will feel comfortable in preparing them on their own.  That’s fine, though I am not sure that lowering the documentation standards is in anyone’s long term best interests.  The national listservs (Forum-L) occasionally have small comments or complaints about fighting NR documentation “creep,” the implication being that those early 10 page nominations had it just about right (if you can’t prove it’s significant in ten pages, then it probably isn’t).  I am not so sure that is the right approach and I’m a little bit sorry to see the era of comprehensive documentation end.  What do you think?
Posted by G. Kramer at 11:43 AM 1 comment:

Back to working on Bonneville Power Administration projects for the past few weeks, this time on a proposed transmission line that crosses the Columbia River between an established substation and a proposed new one that is being built to accommodate all of the new wind generation that is sprouting up along the Gorge.  This project is the first time I have gone through the “Registration Standards” that were developed as part of the BPA Multiple Property Documentation, applying them in a real world situation. 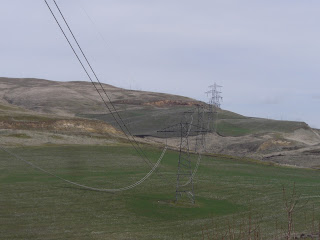 The MPD, which in one form or another has been under development for nearly five years, is intended as a significant management tool that will alleviate SOME of the paperwork that BPA and the eight SHPO offices it interacts with have to process.  Essentially, we defined a historic development context for BPA’s transmission system, all 15,000+ circuit miles and nearly 300 substations that allow them to be (more) easily reviewed for significance and establishes guidelines for evaluation of effect.  Hence the “Registration Standards” that I have been applying to the Big Eddy Substation and four transmission lines that will be affected by proposed project.  So far, so good, but then the two SHPOs haven’t had a chance to respond yet, and that will be the proverbial acid test.
Many people are somewhat surprised that a transmission line, or a switchyard, or a substation related to the generation and transmission of electricity could be considered historic.  Those are usually people who somehow think “historic” and “beautiful” are synonyms.  They aren’t, of course.  And when you think about a “system” that changed our way of life, that is associated with significant themes (like rural electrification, the development the defense or airplane industry in the Pacific Northwest, or the post-WWII development of our region) there are few elements of this region’s history with more impact than the decision to build dams on the Columbia River, create massive amounts of hydroelectricity, and distribute it at low cost throughout the region.  One could argue (and this one has) that there are few other Federal investments in the Pacific Northwest that have had more effect than the creation of BPA and the Federal Columbia River Power System.  The only things that even come close are the Interstate (which just replaced an earlier Federal system of highways) and the land grants associated with the arrival of the railroad. 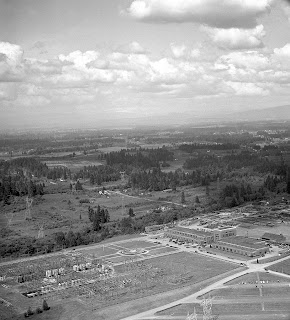 Now I will turn my attention to the J. D. Ross Substation, in Vancouver, Washington.... a fascinating place that among other things demonstrates a utility can have a sense of style.
Posted by G. Kramer at 7:30 AM No comments: