The center, in Talent

Last week saw beginning the research on the Talent Elementary School, an 1899 building that is in the early steps of becoming that city’s second ever National Register-listed property.  Built at the corner of I and Main streets as Talent’s third public school, it was replaced after little more than a decade of school use by a larger, brick, building.  In 1914 the Talent School District sold the property to the city for $1500, which transformed it into Talent’s first City Hall.
Today the building is called the “Talent Community Center” and now, as for most of the past century, that name is entirely accurate.  Talent’s first city hall, the location of the city’s council meetings and officials, the venerable building housed Talent’s public library from 1920 until 1975, has served as a polling place, the post office, the chamber of commerce, and the historical society.  In addition to the Talent Community Club, which played a major role in the building’s history and its grounds, the VFW and the Grange met here,.  So did the Campfire Girls, the Boy Scouts, the Girl Scouts, and the Garden Club and, during WWII, the Red  Cross.  Talent's fire department and police department were both housed here.  The Lions Club has helped improve the property from more than half a century.  There was even a church group that met here for awhile, renting the hall from the city to hold services and in the 1960s and 1970s one of the city’s first preschools occupied the basement. 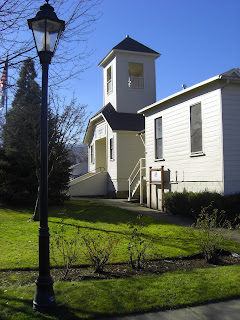 Since the main floor of the Community Center (then the city hall) was the largest assembly space in town, in addition to all its regular users, the building hosted any number of dances, and fundraisers, talent shows, art shows and other events.  A schedule for the City Hall during any typical week of the mid-20th century must have found nearly every citizen in Talent in the building at one time or another.
Looking back at that history, it's hard not to compare the role of the Talent Community Center, a vibrant combination of government, civic, charitable, religious and educational uses all co-mingling under one roof, with the way we separate all those activities into different venues of today.  Few towns still enjoy the experience of pushing back the trappings of local government to make space for the garden club or an ice cream social.  I’m not so sure that is progress.
Talent prides itself on its small town character and its friendliness.  Their historic community center, still a pretty busy location, epitomizes that attitude.  It has for the better part of 110 years.
Posted by G. Kramer at 1:54 PM No comments:

The planning for the reconstruction of the long-lost projecting marquee and neon blade sign at the Holly Theatre, in Medford, continues.  With a funding application from the Medford Urban Renewal Agency, JPR is working with three local sign companies in an effort to design entirely new, and energy efficient, signage that replicates the visual character of these features while using modern materials and electrical equipment to reduce operating costs. 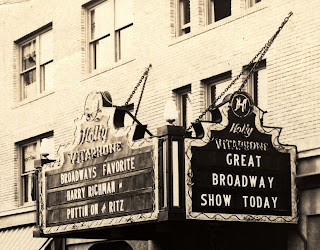 These signs were BIG.  The pylon, at the corner, was 33 feet tall and was considered the largest sign in Oregon outside of Portland when it was installed in 1930.  The marquee, with its projecting globe lights and twined sine-wave neon rims must have lit up 6th Street to announce the shows.  Re-creating them is a fun project…for me and for the sign companies.  They just don’t make ‘em like this anymore.

One advantage that we have in Medford, aside from the financial support of MURA that helps this project go forward, is the City’s visionary adoption of alternate sign approval guidelines.  A few years ago, after several restoration projects involving neon signs were forced to install 3/5th scale pylons by the city’s sign code, the Medford Landmark and Historic Preservation Commission took the bull by the horns and pushed forward alternate standards that essentially allow the City to ignore any aspect of code (height, projection, lighting, number, etc.) when the result better supports the historic character of downtown.  Signs need to comply with building code, of course, but other than that, if you can convince LHPC it’s the right thing, they have the authority to approve it.  We will hope that they agree a 33 foot tall sign, as much like the original as we can make it, will improve historic character!
Medford’s alternate sign standards are on the web, if you are interested.
http://www.ci.medford.or.us/files/medford_sign_approval_guidelines.pdf
Posted by G. Kramer at 8:23 AM 1 comment: