Hidden in the Past

Most of the time, it’s about buildings and buildings are, generally, pretty easy.  They are there, their pieces are either intact or missing, or sometimes hidden, but you can look at them.  And poke around, and if you know what you are looking for, you can usually figure out what you need to know.
But sometimes, before you get to the poking around part you have to understand the history of the thing, too.  History isn’t quite as obvious as four walls and roof and sometimes, when you least expect it, it's dang near hair-pullingly obscure.

I am currently trying to unravel what the heck Horace Knight (or Knights), Marshall Short and Ferdinand Grisez were doing in Siskiyou County between, 1850 and 1852.  And more specifically whether any of it involved building.  Somewhere during that time period these three guys showed up, like so many others, looking for gold.  Short, born in Ohio, came over the Isthmus of Panama.  I don’t now what brought Mr. Knight here from his ancestral home in Vermont and know even less about Grisez. 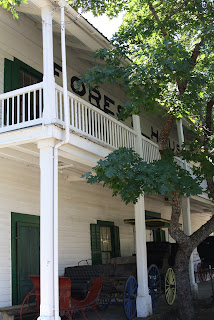 One way or the other the three of them, or at least Knights, ended up at a property SW of Yreka that is still known as the Forest House, the gem I wrote about a month or so ago.   By 1853 Knight had leased a sawmill from a millwright named D. P. Sanborn, the guy who has been credited with operating the “first” sawmill in Siskiyou County, and milling the lumber for the Forest House.  The thing is, I don't know if the "Forest House" was standing when Knight and Sanborn signed the lease.
Knight, and Marshall didn't actually get their patents on the land claims until 1881 and 1882.  On the other hand the Forest House was certainly in place by 1853, when the County dedicated the road between Yreka and Fort Jones, by way of the Forest House Road…And Knight was soon hosting "gala" dances at a fine dwelling with a large auditorium, clearly the building that is still on the property.
I am just stymied that what was obviously an early and important structure receives such scant reference in most of the early histories.  I am currently operating under the assumption that Harry L. Wells, who wrote the 1881 “History of Siskiyou County” had, um "issues" with Knight and Short or vice versa.  Best take care when tangling with a historian. Whatever the reason, if there is one, Wells, and others, report pretty much nothing to clarify what Knight, Short and Grisez were actually doing in the early 1850s.  There's a nice piece in the local paper, published in 1901, and then, after the current owner's family purchased the property in 1909, a host of stories, all from the same source, that are generally consistent in character but vary somewhat in the early particulars.
Some have claimed that the Forest House was built as early as 1850, which seems unlikely to me, but it could have been.  And the current structure could have been built as late as 1865 on the site of an earlier on at the same location, and of the same name.  There is no evidence of that, by the way, but then there’s not much direct evidence of the house that is there now having being built earlier either.  At least not yet.

There isn’t much left of the Gold Ray Dam, on the Rogue River, near Tolo, downstream from Gold Hill, Oregon.  The 1941 concrete dam has been entirely removed, along with the 1904 log crib dam that had been buried underwater, just upstream.  Turns out, unbeknownst to anybody involved with the project, that sometime after November 1941 (when they tried to burn the old dam) they went ahead and covered the face of it with about 12” of concrete or gunite.  This made removal much harder and, unfortunately, meant that we couldn’t save a small section of the log dam for the proposed interpretative displays. 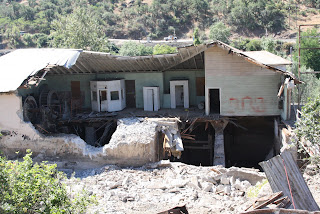 The powerhouse, along with its early 1905-era equipment, is also being removed.  Jackson County, which owns the property, and Slayden Construction, which is contracted to remove the in-stream features (I am under contract to Slayden), have done an incredible job of developing the interpretative kiosk that is to be located up the hill, overlooking the dam site, as part of our Section 106 mitigation plan. 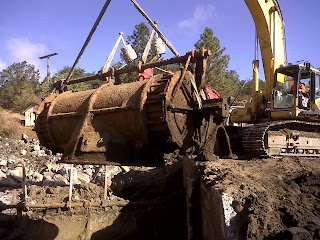 One entire generation unit, the turbines, the wicket gate controls, the lower and upper pulleys (those that were rope driven), plus the 750kW General Electric generator and the exciter will be removed from the powerhouse and relocated to the old Clubhouse pad. (That's one of the 42" diameter turbines, above, freed of the muck for the first time in four decades).  Interpretative panels will explain what these features are, how they worked, and the history of the Gold Ray site. Should be a pretty effective display.
Posted by G. Kramer at 7:55 AM No comments:

The Bridges of Multnomah County

Back to working on Portland bridges again. There are lots of bridges there, across the Willamette, in downtown and after having drafted a context statement, a Multiple Property Submittal that covers ten of them, I am now nibbling away at the formal nomination of four spans owned by Multnomah County; the Hawthorne, Broadway, Burnside and Morrison. 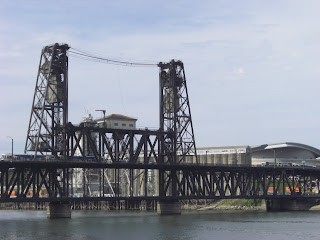 Writing about these spans it is a struggle to avoid the use of superlatives. It’s an amazing collection Portland has put together, including works by some of America’s most renowned bridge engineers such as Gustav Lindenthal, Ralph Modjeski, David Steinman, Waddell and Harrington and Joseph Strauss. In Portland, between the upstream Sellwood and the downstream Fremont bridges one can find the oldest vertical lift span bridge in the United States (the Hawthorne), the ONLY double-vertical lift span in the world (the Steel Bridge), and the largest Rall Bascule bridge ever built (the Broadway). The St. Johns Bridge was the longest suspension span in the world when it was completed and, until very recently, the Fremont Bridge was the longest orthotropic tied-arch span in the world too. Each one of these bridges, aside from the incredible functional value that they bring to Portland, is in its own way something of a masterpiece, an amazing piece of engineering whether it’s the longest, oldest, first, or whatever other superlative that can be layered atop the simple fact that this is a great set of bridges. The fact that you can stand on one and, in most cases, see almost all the others, is just stunning. 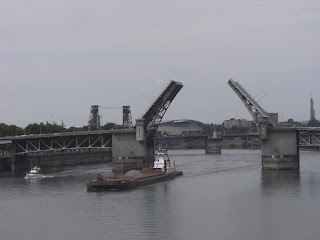 We preservationists can be fairly cutting when the mood strikes. Efforts to save historic structures by relocating them in packs to safer, less pressured ground, are almost universally dismissed as “preservation round-ups.” In Portland, over the period of 1910 to 1973, the City, the County and the State of Oregon have effectively created what amounts to a “Bridge Round-Up.” And it’s a pretty spectacular assemblage.
Posted by G. Kramer at 2:06 PM No comments: