Among the several bridges we’re working on at the moment are four covered spans located in western Linn County, a county blessed with the second largest collection of covered bridge in Oregon, a state that boasts more covered bridges than any west of the Mississippi.  Linn County is in the process of making upgrades and improvements to the Short, Hoffman, Hannah and Larwood bridges, all of which rather still carry traffic. 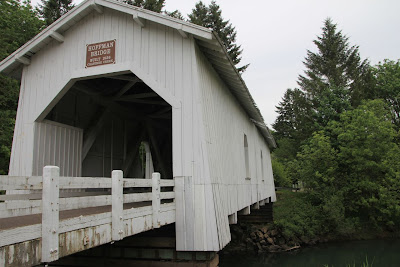 Covered bridges are beloved anachronisms, relics of a time gone by when counties relied on standard plans from the State to quickly build spans over western Oregon’s many creeks and waterways.  This being Oregon, wood was plentiful and there was no shortage of skilled mechanics who could assemble stout bridges in a cost-effective fashion.  Original construction prices for covered spans would buy a small import car today.

As the state grew, traffic grew in volume and weight, especially on rural roads that often served logging trucks descending from the mountains leaden with trees on the way to the mill.  Covered bridges, though built of huge timber beams were often unequal to the task and so were replaced with steel and concrete to take those heavy truck loads.  Sometimes they were bypassed, by a new and larger bridge nearby, converted the old span into a pedestrian or bike bridge.  And sometimes the old covered bridge was strengthened and modified, but continued to function.  An example of this last category is the Hoffman Bridge, spanning Crabtree Creek, southwest of Scio, in central Linn County. 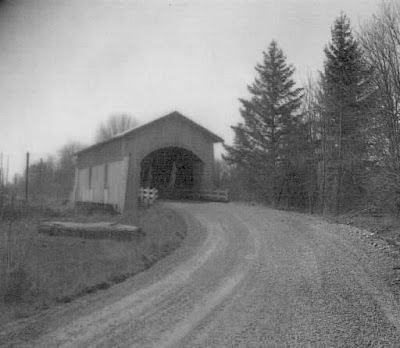 Crabtree Creek Covered Bridge was built in 1936.  It was renamed Hoffman after its builder…and perhaps to differentiate from several other covered bridges across that stream.  The original design, borrowed from the State Highway Commission, called for an arched portal, as the “ends” of a covered bridge are called.  As truck loads got larger (and as trucks got wider) portals (which are just single-thickness panels made up of wide boards) were often damaged.  In Log Truck v. Bridge situations, it’s usually the log truck that wins.  The common solution was to enlarge the portal, to create more clearance, and the typical method of doing so was a segmented arched opening.  At Hoffman this happened sometime after 1966.

The current restoration of the bridge includes replacing the bad metal roofing with wood shingle, as it was originally, and repairing and augmenting some of the structural members of the railing and timber deck, to better carry modern loads.  It would be nice to restore the original graceful lines of the portal, but log trucks are even bigger now than they were 50 years ago, so the logical decision is to leave it the way that it is.
Posted by G. Kramer at 9:38 AM No comments: 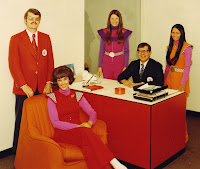 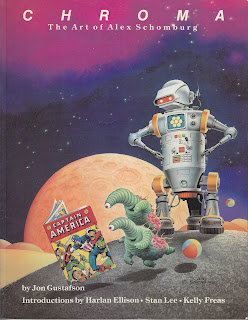 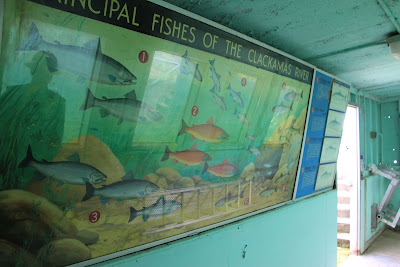 Schomburg moved to Hillsboro, Oregon in 1962, after having come west, to Spokane, to live near his son.  A year later, though nobody seems to know how, he connected with PGE and lent his considerable skill to the fish of Clackamas, a far cry from his normal comic and science fiction subjects.  Today, half a century later, that mural is still there, even if it’s no longer accessible to the public.  I think we’ll try to do something about that.
Posted by G. Kramer at 10:22 AM No comments: