Nestled into an arc of headstones at River View Cemetery is a fine marble monument that on its west face reads “Eastham” and on its east, “Morey.”  Historians of Portland, especially of Portland’s electrical utilities, may recognize those names and wonder why they are both found on one marker.  I certainly did. 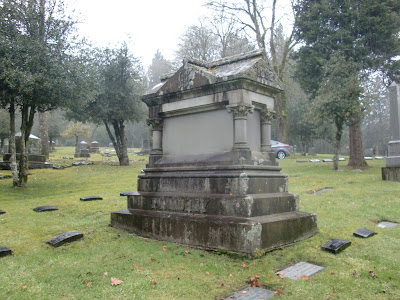 Parker F. Morey was a mechanical engineer who arrived in Portland in about 1879 and, in 1884, started the United States Electric Lighting and Power Company, one of Portland’s earliest power utilities.  Edward L. Eastham was an attorney in Oregon City.  Prominent and successful, he was among the first to recognize the hydroelectric potential of Willamette Falls and began buying up water rights there with the idea of building a huge generation plant.  In 1888 Eastham, with his water rights, and Morey, with his knowledge and Portland customer base, joined forces and created the Willamette Falls Electric Company.  Eastham was named President.  The following year the new company transmit DC, Direct Current, power from their “Station A” at the Falls all the way to downtown Portland, a distance reported at either 12 or 14 miles, depending upon the source, but universally recognized as one of the first “long distance” transmission of electricity in the world.  The rest, as they say, is history.  The Willamette Falls Electric Company was wildly successful, began buying up its competition both in generation and electric trolleys.  Morey replaced Eastham as President, when the latter died in 1891, and by 1906 the company they founded emerged as the Portland Railway Light and Power Company.  Today that firm is better known as Portland General Electric, which still produces power at the Willamette Falls. 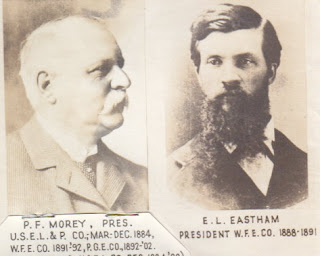 But still, most business partners, even successful ones who may have had high respect and friendship between them, don't share a burial plot and there was no report that Eastham and Morey were otherwise related by blood or marriage.  In the normal sense, they weren’t.

Edward Eastham, born in Oregon City in 1848, died on January 18, 1891, before he ever saw how successful his power company would become.  He left a widow, Clara, and six children, one just an infant.  Eastham, also a State Senator, was mourned as “Oregon City’s foremost citizen.

Parker Morey, born in Missouri in 1847, lived longer, though he was just 56 years old when he died.  He and his wife Maud had three children, two girls and boy, before Maud passed in 1888.  I’m not sure exactly when, but soon after Edward’s death, Clara and Parker joined their families into one, Clara inheriting three step-children and Parker six.  When Parker died, on July 7, 1904, the entire family was with him on their farm near Oregon City. 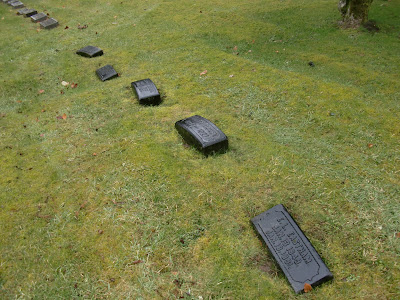 Clara Eastham Morey, died July 23, 1927, at the age of 72.  She was survived by two daughters and four sons, two stepdaughters and one stepson.  At River View Clara's modest headstone is at the center point of the Morey-Eastham monument.  It is flanked on the west by Edward.  Parker is on the east.
Posted by G. Kramer at 11:26 AM No comments: 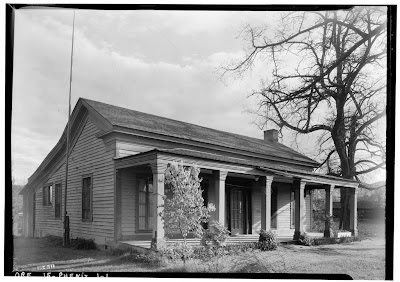 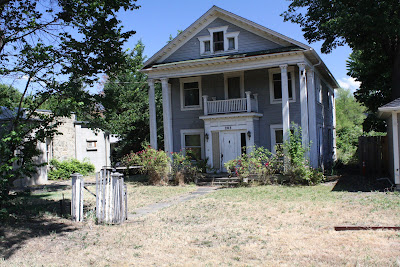 The one thing I rather expect to be in short supply is higher-style Victorian-era.  Phoenix wasn’t that kind of town, not since it was called Gasburg.
Posted by G. Kramer at 7:29 AM 2 comments: 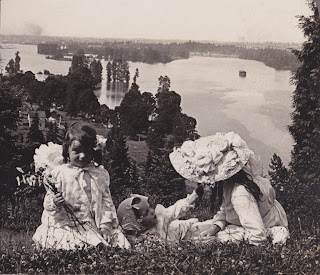 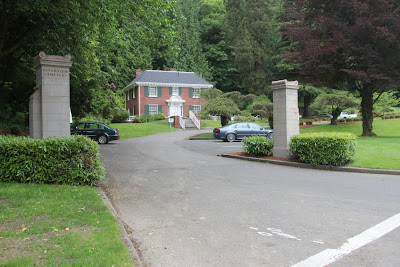 While River View’s history inside the gate is fascinating, and certainly worthy of the extended study it’s finally getting, there’s a lot of transportation history just to the east.  Next time you drive down what is now SW Macadam Avenue, imagine yourself in a fine carriage, pulled by a fast pair.  Maybe you can stop somewhere had have a beer.
Posted by G. Kramer at 9:09 AM No comments: