Oh mysteries of the internet!  For reasons unexplained, one of the most popular pages on this blog has been the one about replicating the prismatic glass at the Sparta Building, in downtown Medford, that was posted 18-December-2010.  I followed up with an in-process in June and now, that the windows are in (and having no shame) I thought I’d post a few pictures of how those transoms look installed.  The Sparta project is moving ahead; most of the exterior glazing is in and the tile bulkheads are ready for grouting.
I’ve also put a photo in showing the replicated sheet metal cornice (stored on the roof for the moment) that will soon be mounted on the south elevation, replacing the one that a previous owner foolishly removed and destroyed. 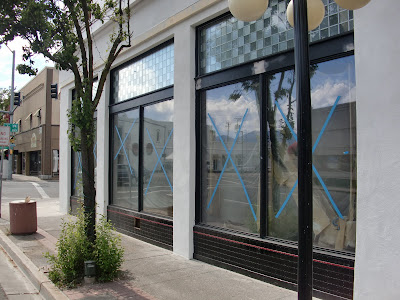 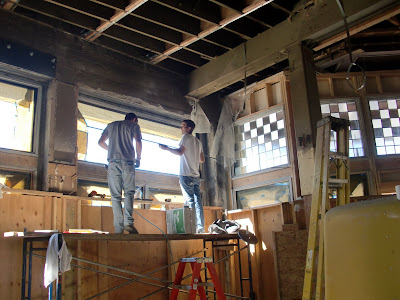 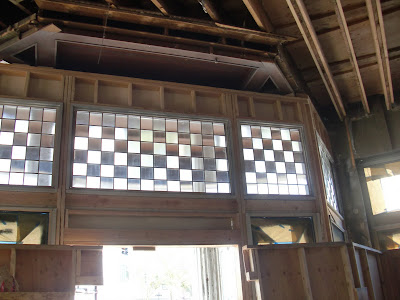 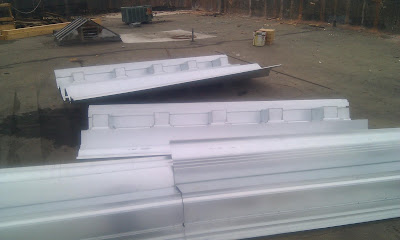 In 1979 the Oregon SHPO approved a thematic study, a multiple property submittal, to list 46 of Oregon’s then 56 covered bridges on the National Register.  That document brought not only new appreciation for these quaint structures, but eventually access to funding through the Federal government and the Oregon Department of Transportation.  One of those 46 structures, the Irish Bend Covered Bridge, located outside Monroe, Oregon, was already in trouble.  The bridge, built in 1954 from 1920s plans, had been bypassed by a new road and the portion of the Willamette Slough that it traversed in this rural, agricultural, area had been shunted through a culvert.  Hardly romantic, but certainly functional and easy-to-maintain.

Benton County, which could no longer maintain the bridge with road funds, tried to find a good use for the span as interest in covered bridges grew.  They offered it to the City of Albany, which considered moving it to Bryant Park, and then to Multnomah County, who as Oregon’s most populous county felt disadvantaged by their lack of a covered bridge.  Neither offer came to fruition.  After what the Covered Bridge Society of Oregon termed “14 years of uncertainty,” the Irish Bend Covered Bridge was disassembled and the pieces were stored at the Benton County Fairgrounds.  Oregon’s State Advisory Committee on Historic Preservation did what such committees do when a resource is dismantled with no assurance it’ll be saved; they removed the bridge from the National Register in May 1989.

They may have acted precipitously.  Spurred by the situation, the Covered Bridge Society approached Benton County’s Board of Commissioners with the idea of rebuilding the bridge as part of the Campus Way bike path at OSU.  The location was perfect, crossing Oak Creek, out on the western end of the campus near the agricultural college’s barns.  It’s about as rural a location in the middle of college campus that you can imagine.  The County said “sure,” and offered to pony up a third of the funding (and the bridge) if the community could raise the remainder.  OSU agreed to the idea, funding and volunteer hours, much of it from off-duty Benton County Public Works employees and OSU staff, brought the bridge back to life, rebuilding the trusses, and replicating the damaged pieces carefully and accurately.  The rebuilt Irish Bend Covered Bridge was rededicated on November 13, 1989. 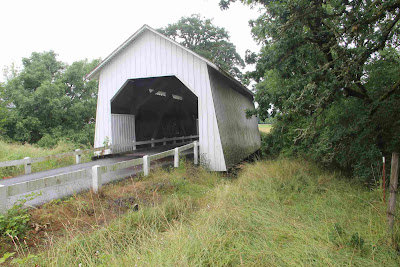 While the story has a happy ending, the bridge hasn’t been formally considered “historic” since May 1989.  As part of a project to better protect the bridge and do some minor work on it, Benton County is now going ahead and submitting a new nomination to again list the Irish Bend Covered Bridge on the National Register.  Oregon, today, has only 50 remaining covered bridges.  It will be good to see one more recognized by the National Register.
Posted by G. Kramer at 8:06 AM No comments:

The Green Bridge of Sheridan

Sheridan is an incorporated town located between McMinnville and Willamina, on the South Yamhill River, in Yamhill County.  Platted in 1866, a major feature of the community from the start has been the bridge, connecting the business district on the south bank of the river, with the county road, what is now the Willamina-Sheridan Highway, on the north.  If you wanted to get across the river, you went to Sheridan, to the end of Bridge Street, and did.
The wooden bridge (there may have been more than one, Sheridan has a long and sad history of fire and flood) was replaced by a steel thru truss in 1910.  We know this from photos that show the bridge before the big fire of 1913, and from a short notice in the Oregonian about several Sheridan merchants that were upset about being assessed for the cost of the approach spans.  That first steel bridge was reportedly salvaged from its original location, across the Willamette River, in Portland.  Moving steel bridges around was an early form of municipal recycling. 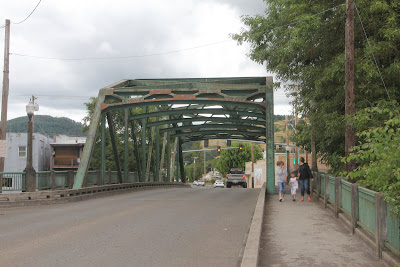 But Sheridan prospered, despite the floods (there was a bad one in 1921) and the fires (another in 1922, destroyed most of the commercial district) and soon traffic outgrew the salvaged steel span that was probably 20 years old before it made it ever made it to Sheridan.  In 1939 the Mountain States Construction Company, of Eugene, put the finishing touches on Sheridan’s last bridge, a 131’ long Parker-design thru truss designed by the Oregon State Highway Department and funded in part by the New Deal’s Public Works Administration.  The Sheridan Bridge still stands, almost entirely intact, eight decades later.  Painted by OSHD as they painted most of their steel spans during that era, it’s affectionately known as the Green Bridge.
Sheridan has received funding to rehab the bridge, to improve its structural capacity for seismic, to repaint to protect the steel from the elements, and to keep it as the iconic landmark in downtown for a long time.  It’s a great project...and a fun one to document too.
Posted by G. Kramer at 2:25 PM No comments: