The Liberty Theatre, in North Bend, was designed by Tourtellotte & Hummel, of Boise and Portland, and opened on Easter Sunday 1924.  It cost $50,000, and was just one of the fine concrete, fireproof, structures built in that city during North Bend boom of the early 1920s.  The Liberty showed movies through WWII but was closed when the newer, wide-screen, Port opened.  It sat vacant for a time before its owners leased the building to Little Theater on the Bay (LTOB), a Coos County-based community theater group.  LIBERTY  LTOB purchased the building in the 1970s, paid off the mortgage in 1996 and even bought the lot next door. 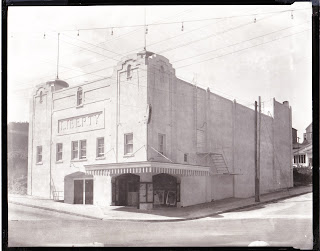 Coos County, so isolated for so many years before the coastal bridges and highway was completed, developed a rather amazing tradition of high quality local theater.  In those early years there just wasn’t much entertainment there and people, talented people, learned to entertain themselves.  LTOB is now the second oldest continuously operated theater group in Oregon, and has put on productions for more than six decades.  Their alumni include people who went on to Hollywood fame (Roy Scheider), people who perform at OSF, and yes, just as likely the local teacher, the guy that works at the mill, or youngsters from area schools.  It’s community at its best.  The quality is rather astounding.

Focusing on theater, LTOB lucked out with the Liberty Theatre but it was never exactly their primary focus.  As long as the roof didn’t leak, the power worked, and the acoustics were good (they are great) the theatre was just a building.  There has been an on-off interest in new digs, maybe restoring the Liberty or maybe replacing it, but nothing much happened.  Perhaps inspired by the work on the Egyptian Theatre, just down the road in Coos Bay, the LTOB Board asked us to come out and take a look. 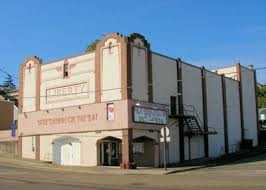 I had driven by the Liberty for years and never really noticed it.  The rather monochromatic, (I called it Taupe-on-Taupe) faded, paint scheme didn’t exactly draw the eye and, located at a curve on Sherman Street at the south part of downtown North Bend, the natural inclination is to look away, toward the road.  Certainly I'd not been inside and, frankly, when the chance finally arrived this Spring, I didn’t expect to find much.  I was wrong. 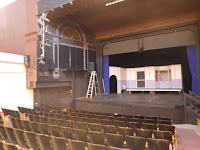 The interior has much of its original design…the lighting and even the seats are all still there, probably not much different from what they were in 1924.  There has been some change and loss (the painted murals are hidden) and there’s stage lighting and sound from the conversion to live theater, but there's lots to work with.

The building is in good shape, mostly with deferred maintenance outdated systems, but nothing major.  LTOB continues to put on plays and the magic on stage buys a lot of forgiveness for the limited services, lack of indoor ADA restrooms and small lobby and concession stand, but certainly the Liberty, a phenomenal Moorish design, could be so much more than it is.  I couldn't see any reason not to rehab it and make it what it should be. 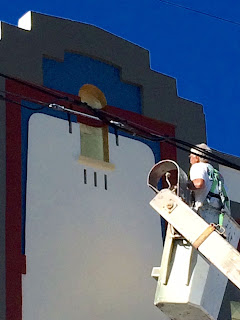 LTOB decided to launch a fund-raising effort.  The City of North Bend’s Urban Renewal Agency very generously stepped up to the table with a major (like 6-figures major) matching gift and over the next few years, in a series of phases, the Liberty Theatre will get the attention that its needs.  We’ll bring the “show to the sidewalk,” and give LTOB the venue that their tradition of quality productions deserve.

Phase 1 was painting the exterior and having people notice the building and boy, do they ever!  We did some testing to determine the color history of the exterior and came up with a historically-based design to support the Moorish style T&H chose in 1924.  Next up, new restrooms and some lobby areas on the lot to the south, getting rid of the oh-so-lovely Sani-Can and then later a new marquee, some storage and rehearsal spaces, new systems, and more.  Stay tuned! 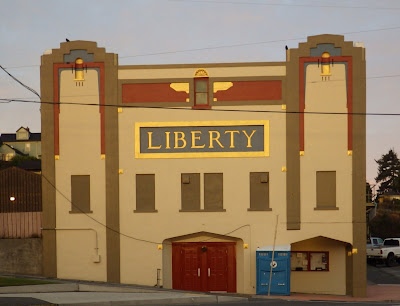