Over the years I have been involved with many projects that generate electricity, mostly hydro projects, but also Oregon’s only nuclear project, the Trojan Plant, near St. Helens.  In general there are only a few basic forms of making electricity.  You can use nature in the form of water or wind to spin a turbine (which spins the generator), in recent years you can use the sun to directly create electricity through photo voltaics, or you can generate steam to turn the generators.  There are lots of ways to create steam; you can tap it geothermally or you can create heat, which boils water.  HOW you create the heat is the main difference between most forms of generation other than solar, wind, or hydro.  At root most generation is centered around what amounts to a big tea kettle...the boiler, than can be fired by coal, by wood waste or hog fuel, by natural gas, or by a nuclear reaction.  At its core even the Trojan Plant, which people somehow envision as using some primal natural force (an atomic reaction) to create massive amounts of power was far more mundane....it was using all the heat generated by that reaction to create high pressure steam to spin a generator.  Exactly the same process as burning coal, or wood, just far more efficient and on a far larger scale (and yes, with a more complex waste product...but that isn’t the point of this little discourse). 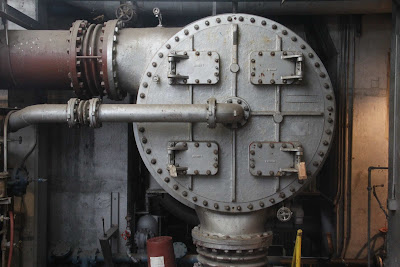 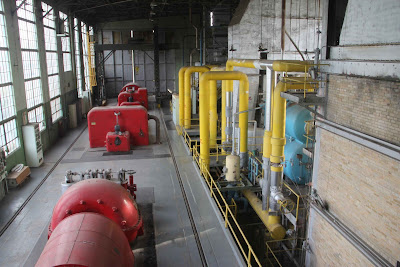 The more common way to create steam power for electric generation is to burn coal, and that is what most of America, without the plentiful waterways of the Pacific Northwest, does to power its computers and recharge its IPODs.  Coal is abundant, but it’s not generally considered green, and most steam plants in the Northwest now burn natural gas.
Last month I toured one of Oregon’s few remaining steam plants of any sort, one built in 1930 to burn bunker oil, added to in the 1940s and 1950s to burn sawdust and wood-chips, and today burning natural gas.  EWEB’s Standby Steam Plant, located right in downtown Eugene, is also interesting that while it was designed to produce electricity (burning material to raise the temperature of water to turn one of its three generators), it was later converted (in 1962) to actually create, well, steam, that was directly transmitted around the downtown to heat various private and public buildings.  For the moment, the newest unit at the plant still does just that but all the earlier units remain in place, just as they were designed, and so the plant functions as something of a textbook of steam plant generation technology between 1930 and 1950.  I am enjoying researching, and documenting, the operation of this historic facility as part of EWEB’s decommissioning the facility.  It sure makes for some great images...the interiors of mid-20th century industrial facilities are nothing if not photogenic! 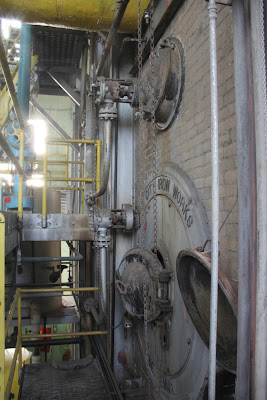 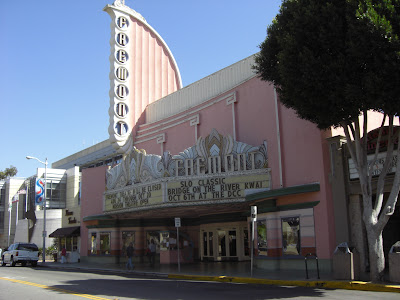