I have written before about the Camp White Station Hospital, in White City, Oregon.  It’s a sprawling 145-acre site that has 50+ buildings constructed in 1942 as part of the US Army’s training mission in the early days of World War II.  Since 1948 the Station Hospital, built of “permanent” construction, has been owned and operated by the Department of Veterans Affairs, providing service to former members of the military. 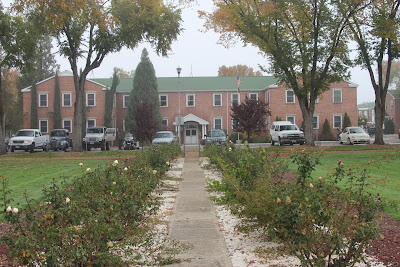 Way back in 1948 the VA was opposed to taking over the Station Hospital for a variety of reasons but politics (in the form of Wayne Morse) won the day, and they have operated the facility ever since.  In recent years, as the “permanent” buildings of Camp White became older and ever-less consistent with the VA’s mission of quality service, the rub between history and function has grown.  To its credit, the VA has maintained, and modified, and upgraded the buildings as it is able, transforming some of these WWII behemoths (the buildings are HUGE) into state-of-the-art medical service facilities.  But in the past few years, as demand for veteran’s services grows, the deficiencies of Camp White’s buildings, no matter how historic, have become a greater obstacle to the VA’s primary care mission.  In 2009 we helped to create a Manual for Built Resources Blog that identified appropriate strategies for upgrades, but some aspects of the 1942 buildings just can’t be reasonably fixed.  Chief among those is the simple fact that most are made of Structural, or Hollow Clay Tile.  This once popular building method (it was both cheap and fireproof) was something akin to terra cotta Lego, but without the little interlocking buttons.  As you can imagine mortared and stacked blocks, held together by plaster on the inside and brick veneer on the outside (at least at Camp White) doesn’t perform particularly well in a seismic event.  Fixing that problem is usually accomplished by building a structural cage inside and then encasing everything in concrete, chewing up most of the interior space.  And interior space is already at a premium at Camp White as the VA attempts to fit vets into rooms designed more than fifty years ago for short term occupancy.

The bottom line is that the VA, after considerable thought, is in the process of removing about 30 historic buildings at Camp White to make way for new construction that is safe, efficient, and meets the needs of the population that they serve.  And let’s face it, for most of that population historic preservation is pretty far down the list of priorities.   So, on the one hand, the loss of a lot of buildings is a pretty sad, if entirely understandable, turn of events. 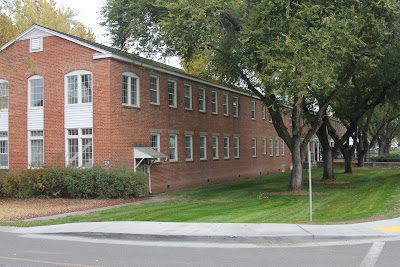 But there is good news too.  First, of course, is that the VA will continue to provide quality services to America’s veterans in southern Oregon.  And the VA isn’t removing all of Camp White.  Many of the 1942-era structures, including several of the key properties like the Administration Building (the top photo), will remain in use, upgraded and modernized as needed under the Manual, for a long time to come.  And the VA has taken the character of its historic site to heart in the design of the new, replacement, buildings that it will construct after demolition.  Many will follow the military designs established in 1942, right down the pitch of the green asphalt roof and the brick veneer.  Check out the two buildings below…one is historic (and scheduled for removal and replacement) and the other was built last year.  Care to guess which is which?  And, if you have ever been to the “Dom,” (okay, Southern Oregon Rehabilitation Center & Clinics) you know about the two-story hallways that connect almost the entire campus.  The hallways, whether original or rebuilt, will remain a part of the campus too. 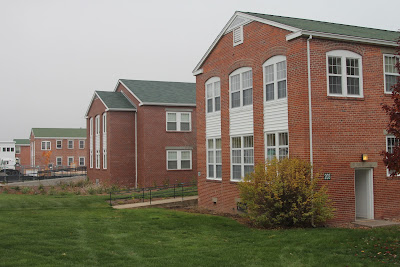 I think if a solider that trained at Camp White, and had occasion to visit the Station Hospital during WWII, were to return for a visit in a few years when this is all completed, he’d feel right at home.  And the VA, for its part, will likely make sure through its continued support of the Camp White Historical Society, and maybe some interpretative signage, that others can also appreciate what’s so significant about the “The City in the Agate Desert” too.
Posted by G. Kramer at 6:25 AM 1 comment:


The Blue Heron Paper Plant, a successor to Smurfit Paper, which replaced James River Paper, which replaced Publishers Paper, who bought the Hawley Pulp and Paper Company was the last in a long line of paper companies in Oregon City, at the Willamette Falls.  (There is an entirely separate, if somewhat related, series of paper companies across the river, at West Linn, where the West Linn Paper Company still operates).  When Blue Heron went into bankruptcy, their plant, and a huge segment of Oregon City’s economy were thrown into a questionable future. 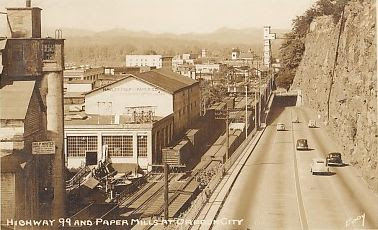 Last year I was part of a huge collection of professionals that participated in what became known as the BAT, the “Building Assessment Team,” looking at what of future value remained among the 60+ structures on the property, what challenges existed to reusing or re-purposing the site for something other than paper making, and what opportunities were available considering this phenomenal location overlooking the Willamette and the second largest waterfall (by volume) in the US.  There are lots of challenges, but there are lots more opportunities if you can just manage to get a grip on all of the many many moving parts on this site, from history, to natural resources, to water quality, to cultural concerns (the Falls are a key site for several Oregon tribes), to the economy and recreation.

The BAT finished its work earlier this year and while we answered lots of unknowns, many more remained.  METRO, along with Oregon City and the bankruptcy trustee that is responsible for the future of the property, recently issued an RFP for a multidisciplinary landscape/planning/economic approach to help the community figure out a viable future for the former Blue Heron Paper mill.  That Willamette Legacy Project garnered national interest, attracting more than dozen highly qualified teams of professionals, each looking to help the community craft a blueprint for the next century of the site’s development.  It’s a question that hasn’t really be asked since 1908, when papermaker Willard P. Hawley began purchasing water rights (including what would have been Dr. John McLaughlin’s) on the south side of the river.  These former gridded blocks of downtown Oregon City will, in one way or another, soon be re-integrated in the downtown, likely to include improved public access along the river for the first time in over a century, and likely to include at least some re-use of the amazing industrial structures such as Paper Machine No. 4, below. 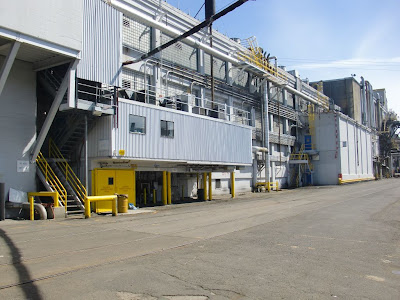 We were pleased to be asked to provide historic preservation expertise to three of the teams that responded to Oregon City's RFP.   And last week we were thrilled to learn that one of them, a team led by Walker-Macy, a landscape firm in Portland, was selected.  I have worked on documenting the history of the Willamette Falls Industrial for almost two decades.  It will be exciting to have a role in helping to planning its future (and we won’t forget its history while doing so).

Anyone who has ever heard me speak publicly knows that among my many underlying beliefs is a fairly obvious one about 100-year old structures.  Simply put, while we may disagree on what to do them or how to regulate them, the one thing we should all be able to agree upon is that they are not making any more of them. 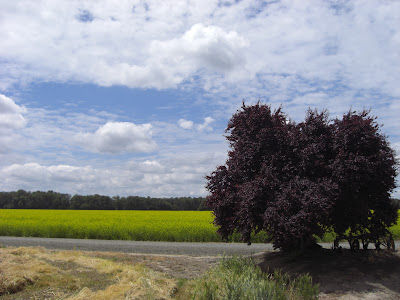 Earlier this week I trotted that phrase out in a study session, where a city was evaluating the wisdom of taking the first tentative steps down the road that could lead to the identification and yes, designation, of some its earliest buildings as “historic.”  This being Oregon, where private property rights are held in high regard, several participants voiced concern about maintaining an owner’s ability to do what they want with their property and not encumbering anyone with a bunch of regulation or "telling" them what to do.

I think property rights are a two-way street.  Sure, an owner should have some ability to use their property as they see fit, unfettered by burdensome regulation.  Everyone gets that, if only because millions of dollars are spent by real estate and property rights advocates to make sure that we, and our legislators, do.  The other side of the property rights street, however, rarely gets any press.  That side is that every property owner should have the assurance that their NEIGHBORS have some requirement to use their property in a sane and responsible manner.  Put another way, nobody ever wants “the gummit” telling them what to do, but nearly everyone, at least anyone living in an urban context, relies upon the government to corral their crazy neighbors and get the junker cars off the front lawn, tone down the wild parties, reduce the scale of the mammoth sun-blocking addition, or re-paint in something (anything!) other than that awful (fill in the bright color scheme of your choice).

We all, especially we that call ourselves preservationists, need to understand that historic designation is just a tool, not an end.  I happen to think it’s an important tool, and I hope you and others agree.  But knowing the history and comparative value associated with a particular property does not, and in general should not, mandate its survival by definition.  Not all historic properties, no matter how significant, are capable of being restored to begin with, or even should be restored.  Cities, communities, have other values (open space, habitat restoration, economic development, etc.) that very often, and very appropriately, outweigh historic values.  It is, ultimately, up to cities, communities, and yes, even property owners, to weigh each of those values fairly and with full understanding, so as to determine the best course.  Obviously that choice may not always be historic preservation, and that, sad it can be, is still entirely understandable. 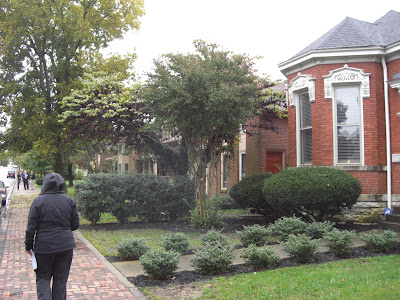 The thing is, you can’t weigh the value of historic significance, or the potential benefit of restoration, if you are unaware of history.  And you can’t or shouldn’t relegate historic values to some second tier “it’s nice to do if nothing else is available” approach, especially if you are leaving that decision up to the property owner. All too often, in our transitory culture where people move on the average of every few years, a community’s most prized possessions can be placed in the hands of individuals or entities that have little understanding, or connection, to its history or culture.  Do you really want McDonald's deciding the future of important resources in your city?  And if you are opposed to McDonalds (or Chevron, or whomever) having that power, why on earth would you give that sole authority to Mr. & Mrs. Jones, or "Bill," that nice guy that works at the market?"

Education, knowledge, is a good and essential thing.  Ask any decision-maker worth his or her salt.  Knowing, identifying, and understanding the history of a community, its context, allows us to fully appreciate the role that this or that property may play in creating its character.  And in some cases, regulation to protect key properties with high value to the community as a whole is and should be an important part of what a forward-thinking community does.  Some properties are simply too rare, too irreplaceable, and too important to the community’s character, to relegate their existence to the hands of the highest bidder, no matter whom they may be.

All cities live and die, both financially and qualitatively, by the investment they can encourage, both for new construction and restoration.  It is unrealistic to ask or expect somebody, anybody, to invest in their property while not providing them some assurance that if they do, their neighbor won’t put in a Pig Farm, or God-forbid, a strip mall (!) next door.  Neighbors and communities have property rights too.