Just a short post to let you see that we've struck "Ionic" at the Sparta Building project in downtown Medford.  The contractors have removed the stucco/brick work that has encased these features for more than five decades.  I am told that there is a severe case of whiplash as people driving by the project gawk.  Hard to believe they ever covered them, isn't it? 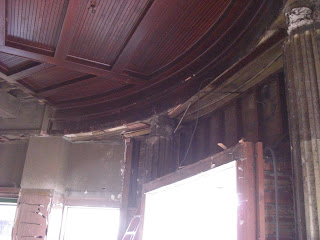 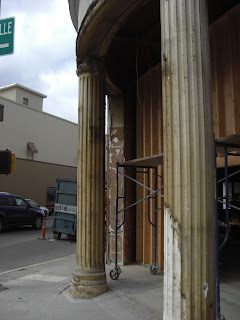 All the cool stained fir beadboard, hidden above three layers of ceiling, was a nice surprise too.  We'll keep almost all of it as part of the new storefront system.  Now we just have to restore the capitals of the columns.  Thank goodness for W. F. Norman!

Awhile ago I wrote about “White Elephants,” and how the lucky city of Medford, Oregon seemed to be on a streak of finding new uses for long vacant buildings, along with new and creative owners with the vision and the wherewithal to actually take them on and restore them.  Well, Medford’s hot streak continues, as last week the Jefferson Public Radio Foundation, already in the planning process for the restoration of the long-vacant Holly Theatre, announced plans to move their studios, museum and associated uses into the also long-vacant Medford Grocery Warehouse. 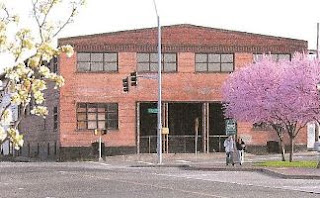 The warehouse, built in 1910 is a fine brick structure that was last used over a decade ago as a dance club.  Purchased by local merchant Bruce Larson, Bruce had us list the property on the National Register with plans to use it as part of his Larson’s Appliance and Furniture business.  That project, like so many before it, never happened and Bruce apparently decided it never would.  Upon reading of JPR’s Holly plans, he contacted them and asked if they had a use for another structure in downtown, saying that if they did, and were willing to renovate the $500K property for a new use, he would donate the Medford Grocery Warehouse to them.  Wow!  Of course, JPR, which had long been looking for new studios to replace its cramped basement quarters on the SOU campus, jumped at Larson’s offer.  After a certain amount of process and planning, the deal was made public last week, to an unsurprisingly excited Medford City Council and media.
So, JPR will now be renovating TWO historic properties in Medford, as the money becomes available.  The Larson’s project is proposed to include a small cafe that will double as live broadcast and live performance space, a small 100-150 seat theatre for movies and lectures, and a new home for the Western States Museum of Broadcasting...a longtime JPR project that has national recognition despite never having found a permanent display space.  Oh, and the JPR offices and studios too.  The 40,000 square feet of the Medford Grocery Warehouse, essentially vacant for years (if you don’t count the pigeons) will once again be humming with activity.  This is exactly the sort of activity that urban renewal agencies live for, extending the use beyond the business hours, bringing new visitors into the downtown core AND taking a long vacant building and transforming it into a hub of activity.  JPR’s Larson’s project, like the Holly, should spark all sorts of associated investment and new business.
Coupled with the Holly, the renovation of the Sparta Building and all the other smaller projects that are going on as the result of the MURA Facade Grant program, Medford is a city that is proving the “down” economy creates phenomenal opportunities if you are willing to provide incentives and seize them.  It’s a good model for other cities to consider.
Posted by G. Kramer at 12:05 PM No comments: