Among the other projects floating around is a more comprehensive historic report on the wonderful River View Cemetery, in Portland.  This facility, established in 1881, was termed Portland’s verdant “City of the Dead” upon its opening, quickly becoming both a tourist destination (the trolley stop ended here for Sunday excursions) and the favored burial ground for the city’s elite.  Walking under the large trees and meandering through River View’s well-maintained, naturalistic, curving roads and paths, one can visit the final resting spots of a virtual Who Was Who of early Oregon, including numerous governors, mayors, senators and other notables like Harvey Scott, Abigail Scott Duniway and Henry Weinhard.  And then there are parts of the cemetery that read like a roadmap of downtown, with all the familiar names.

As connected to Portland history as River View has been from the start, documentation on its history is unusually sparse.  There were a few laudatory reports in the Oregonian about “God’s Acre” before the turn of the century, and the occasional mention in the multiple subscription histories pioneer families published to celebrate their roles in founding the state and city, but nobody has ever sat down and actually written up “the” history of River View Cemetery.

When I started out on this project I assumed that River View, which has always had a fine sense of the importance of its design (they hired architects from Ellis Lawrence, to A.E. Doyle and Pietro Belluschi, among others) would have a fairly complete archive and that putting their story together would simply be a matter of camping out, developing the context, and arranging the pieces.  And while that is partially true (River View has the minutes of the organization’s management committee, along with copies of many of the building plans for the structures built after about 1930), the ONE thing that they didn’t have was the original plan, by German-American landscape architect Edward Otto Schwagerl (1843-1910).  Schwagerl was an interesting, and prolific, designer who worked all over the country, with important works in Ohio, Washington, Missouri and South Carolina (where he designed the grounds of the state capitol building)  The Oregonian made flowering mention of a public display of Schwagerl’s “..large and elaborate maps” in December 1879, but River View had nothing and neither, it seemed, did anyone else. 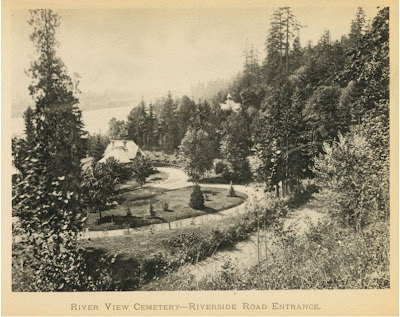 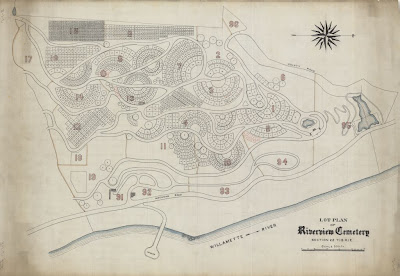 A few weeks ago while in Portland to use the OHS Library I was disappointed to discover they were closed for some annual cleaning.  Undaunted, I headed over to the PSU library, where I found some excellent journal articles on the history of the “Rural Cemetery” movement.  At noon, as I headed off for a quick bite before another meeting, I recalled that the City of Portland Archives had relocated to the PSU campus.  Finding they opened at 12:00 (and having had some earlier correspondence with the archivists regarding River View), I thought I’d pop in for 30 minutes and take a look.  The incredible staff as the Archives took up my mission with zeal, and brought out files and references in record time (Thank you Brian and Mary!) There, although mis-dated as “circa 1900” we were absolutely thrilled to find what I am pretty confidant is at least a sheet from the original Schwagerl plan for River View (it's not signed, sadly).  Along with its 19th century graphic quality and materials, the plan has one very interesting feature that places it pretty early in Portland’s history.  At the bottom of the design there is a wharf, for river-deliveries.
Posted by G. Kramer at 8:25 AM No comments: