It's Always the Windows

It’s always the windows, or so it seems.  There is no denying that the design and quality of windows play a huge role in the appearance of a building exterior.  They are both functional (who abhors natural light?) and character-defining.  Take any building, of any style, and fill the windows with wall and you will almost certainly destroy its character.  Sure, it’ll also be more energy efficient (windows, for all their positive attributes simply aren’t.  Period), but that’s another rant. 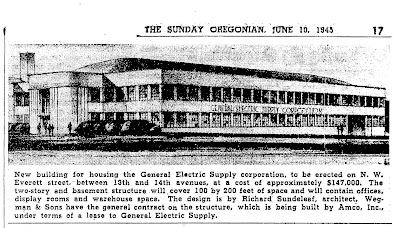 I have been writing about the re-creation of the long lost transom panels from the 1910-11 Sparta Building in Medford but there is another project, at the opposite end of I-5, that is looking to return a building full of windows to their original, historic, 1945 glory, of a much different, if still important, type.  Famed Portland architect Richard Sundeleaf designed the streamlined building at 300 NW 14th for the General Electric Supply Corporation Building with 15-light industrial steel sash windows creating two complex bands of natural light along all three exterior elevations (the building has a party wall to the north).  In 1980 Sundeleaf, perhaps against his own better judgement, oversaw the remodel (remuddle?) of the building that infilled the entire bottom band with CMU and replaced the operable windows panels on the upper floor with fixed glass panels.  Tinted ones.  Sorry, Mr. Sundeleaf, but WHAT were you thinking? 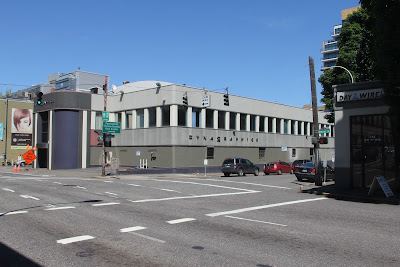 Cut to 2011...new owners are in the planning process to entirely remove the existing ugly and replace it with custom manufactured, 15-light, steel sash, industrial windows on both the upper and lower floors.  Two strong, visually dense, bands of windows in place of the current 'single-story on a pedestal look"  will re-establish the character of the exterior.
Windows.  It’s always the windows.  In this case returning them to their original appearance and design will be a positive change for the corner, for the client, and for the history of the building.  I'd like to think, Mr. Sundeleaf would be pleased.
Posted by G. Kramer at 7:53 AM No comments: