If you have been reading these posts for awhile, you will recall the excitement of last year when we “struck tile” in the exterior Foyer of Medford’s Holly Theatre.  That tile, hidden under the ugly glue-down carpet and a thin layer of mortar, was a series of hexagonal field tiles with four 1x1 green tiles in the center.  The design provided the inspiration for entirely new work that was installed in time for the Holly’s “Grand Relighting” in April 2012, not to mention the underside of the marquee (which is also a hex pattern).  The future of the Holly, as an element of the so-called JPR-SOU dispute, is entirely open to question at the moment, but that’s another post. 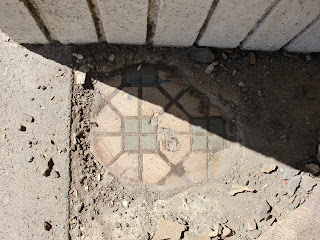 I assumed, as an exterior element, that the Holly tile was the work of Frank Chamberlain Clark, a prolific and highly regarded southern Oregon architect who is credited with the exterior design of the theatre.  That now appears to be wrong.  The interiors of the Holly were  by Carl R. Berg, a theatre designer who worked for B. F. Shearer, out of Seattle and was responsible for 100s of theatres during his long career.  Another of Berg’s interiors is the fabulous Egyptian Theatre, in Coos Bay, also a project that we have been working to help reopen and restore. 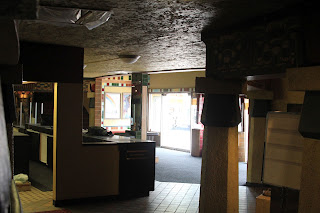 Earlier this week, while touring the Egyptian in depth with the engineers who are working to craft a solution that will allow us to get the building back open and in use, I finally had the time to really poke around and look at things (previously I’ve only been in the theatre for a few short bursts of hour or less each.  This week I got to be inside for hours and hours!).  Anyway, behind the bad 1970s concession stand, behind the pretty cool 6x6 floor tiles, there was another tile surface, sort of a trapezoidal shaped area that was filled with smaller mosaic floor tile in a very familiar looking pattern. 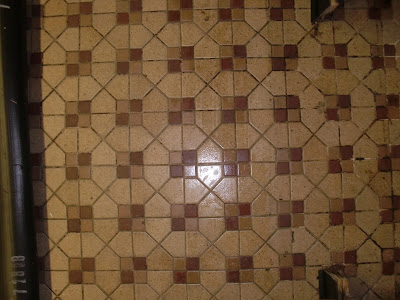 Granted that this design isn’t exactly as unique as a snowflake or fingerprints, but I am going to take this as evidence that the same designer was responsible for tile elements at both the Holly and the Egyptian.  That designer would surely be Mr. Berg.  Now I am curious if there is a hex pattern tile at the Cordova Theatre, in Pullman, Washington.  Does anyone know?

I wish I’d seen the Egyptian floor sooner.  It’s in much better condition than that of the Holly foyer, but how could it not be?  It’s on the interior and nobody ever covered it with concrete!  It's in good enough condition that I will hope it can be retained as part of some re-designed, more attractive, and more functional, concession area in the Egyptian's future.
Posted by G. Kramer at 9:52 AM 4 comments:

While out in Wasco County last week, tracking T-lines (which often involves driving slowly up some dirt road and craning your neck through the windows to see where some group of nearly invisible conductors track across the landscape to a giant latticework tower.  When you finally stop and get out of the car, underneath this huge humming thing, you feel like a moron for having not seen it in the first place) I happened to be cruising through the town of Simnasho, on the Warm Springs Reservation.  All things being equal, the Warm Springs has a GREAT road system, well-marked, mostly paved, and really easy to navigate.  The intersection of S-400 and S-100 (one of which is also numbered Road 3, I have no idea why) is downtown Simnasho.  According to the McArthurs, the post office here began in 1886 and with several service gaps more or less continued until July 1954.  Today Simnasho has a small market, an elementary school, and some residences but for my purposes the intersection was mostly notable for a neat collection of early wood-frame residential buildings.  And, in the “Found Oregon” series, the really amazing Simnasho Church.  It was an unexpected diversion from T-line inspired neck-craning, and for most people certainly made for better pictures. 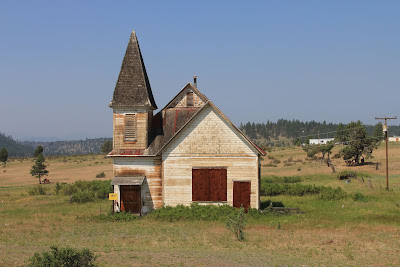 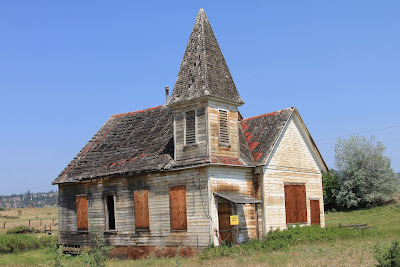 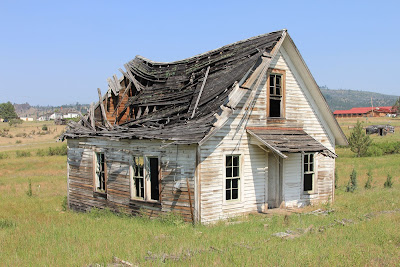 I wasn’t able to find out much about the church beyond the fact that there are a LOT of photos of it all over the web.  A local history site reports that it was Presbyterian, and hasn't been used since the late-1960s. I can believe it.  The church and the small house to the west, what I assume must have the manse, are something of a testament to the impacts of the environment on wood buildings.  Anybody know anything about this one?
Posted by G. Kramer at 11:37 AM 2 comments: