Willamette Falls Past and Future

A few days ago I had the experience of touring the former Blue Heron Paper Plant, at Oregon City, with members of the media, to discuss this history of this incredible site at the Willamette Falls on the eastern shore of the river.  This is the place, in the 1820s, where Dr. John McLaughlin established what would become the capital of the Oregon Territory.  The Falls have been a draw since prehistoric times and as the second largest waterfall, by volume, in the United States (after Niagara), they quickly became the focus of a variety of Oregon’s earliest industries.  McLaughlin himself had a small race cut out of the bedrock to power a sawmill and by 1865 what became the Oregon Woolen Mills was located here.  In 1908, having left his position at what is now the West Linn Paper Company, across the river, W. P. Hawley established his own firm, the Hawley Pulp and Paper Company, on McLaughlin’s old claim and soon was producing 200,000 tons of paper products on a daily basis.

Hawley built a booming business, based on his own decades of expertise, a ready supply of timber, and the abundant power of the Willamette Falls.  He rented PGE’s old “Station A” out at the head of the falls, built his own buildings for paper machines and mills, and the business spread out along Oregon’s Main Street, sharing the block with a hotel, a laundry and McLaughlin’s decrepit house.  As he grew the business (and gave the house to the city, which moved it up the hill), Hawley’s structures became larger, more sturdy (concrete, not wood) and slowly took over the entire block.  In the late 1920s Hawley built two new massive, concrete and glass buildings on the east side of the street  (known as Mill B and Paper Machine No. 4), creating a clean streetscape of multi-story industral buildings.  Eventually Hawley's paper company took over the old Woolen Mill property too, occupying over twenty acres lining everything on both sides of Main Street between the railroad line and the river.

Hawley sold the business to Publisher’s Paper in the 1940s and then a series of ownership changes in the 1980s and 90s culminated with the formation of employee-owned Blue Heron Paper Company, which sadly closed its doors about a year ago.  The future of the site is unclear, though Metro has expressed interest in providing the public better access to “Niagara of the Pacific.”  That is why the media was interested and that is why there is a lot of discussion on-going about the opportunities, and the liabilities, that result from over 180 years of industrial uses.  Last week, on Wednesday, it was a beautiful day at the Willamette Falls.  A lot of people are working to try figure out to create a situation where more Oregonians can enjoy the view McLaughlin did.
Posted by G. Kramer at 7:19 AM 1 comment:

One (?) Step Backward in Medford

I have avoided writing of the multi-faceted disaster that is surrounding the JPR Foundation projects in Medford because, frankly, I can’t believe the lack of vision of the State Board of Higher Education and keep hoping that saner minds will prevail.  This is beginning to look doubtful.  In short, SOU and the Chancellor’s office, despite having reviewed and approved JPR’s purchase of the Holly (and their acceptance of a local businessman’s generous donation of a second structure to solve their decades-long studio needs) has now launched what appears to be something of a vendetta against JPR, Medford and my eldest brother.  You can read the latest here: MT June 14

Basically, SOU and the Chancellor have determined that JPR, despite its nearly 10 years of successful operation of Redding’s Cascade Theatre (a structure that was actually purchased with Higher Education bonds) shouldn’t operate anything other than radio stations and shouldn’t be in the business of renovating theatres (like the Holly) or donated buildings (like the Medford Grocery Warehouse).   That JPR has been doing exactly that, with Higher Ed’s agreement, for some time, hasn’t stopped SOU from terminating JPR’s longtime director, threatening to personally sue the entire JPR Foundation Board of Directors, and undermining the future of the Holly and its potential to help revitalize downtown Medford.

For those of you in southern Oregon, you will not be remiss in thinking this looks like narrow-minded, parochial Ashlanders trying to quash good things in Medford.  From my vantage point I wonder why the Chancellor’s office suddenly became so opposed to JPR’s plans for the Holly and I don’t think it takes a rocket scientist to connect the dots to the only entity in southern Oregon that has ever voiced opposition to the Holly Theatre.  Holly Position Statement There seems to be no shortage of shortsightedness in some quarters.

There is, however, vision in southern Oregon. Mayor Gary Wheeler and the City of Medford have been incredibly supportive of the Holly (and so, in truth, has the City of Ashland and most of Ashland and other southern Oregon residents).  Only SOU President Mary Cullinan (who originally congratulated JPR on the Holly and the Jefferson Square project) and the Chancellor’s office (generously) appear to be hell-bent on keeping JPR on campus or at least keep it out of Medford.  Not so generously they appear to be set on wrecking one of our region’s most important, and most successful, cultural institutions.  You have to wonder why.

If this mess is allowed to continue there is, I fear, a very good chance that not only will Medford lose the Holly and the Jefferson Square projects, but that southern Oregon and northern California will lose the quality public radio system that it has come to enjoy and expect.

Just two months ago more than 1000 people assembled in downtown Medford and cheered the re-lighting of the Holly's brilliant neon signs and the completion of its beautiful façade renovation. Sometime next week we’ll remove the scaffolding and the truss repairs will be complete, returning occupancy to the Holly auditorium for the first time a decade.  If the Chancellor’s small-minded, short-sighted, unwarranted, and nasty attacks on Medford and the JPR Foundation Board of Directors stand, it will almost certainly be a very long time before anything else good happens at the Holly Theatre.  That would be just one of the serious results of this curious and unfortunate situation.
Posted by G. Kramer at 9:00 AM 3 comments:

Progress at the Coos Bay Egyptian!

The Egyptian Theatre, in Coos Bay, is making great progress.  Earlier this week the marketing study, by Herb Stratford of Historic Theater Consultants/Mary Bosch of MarkeTek, was released to the public, identifying a sustainable mix of live performance and a range of films that can fill a niche in the Coos County/South Coast region.  This will enable the theatre to again serve its fans and rebuild back the audience that it lost in March 2011 when the doors were closed following the issuance of a structural report that result in a “dangerous building” designation. 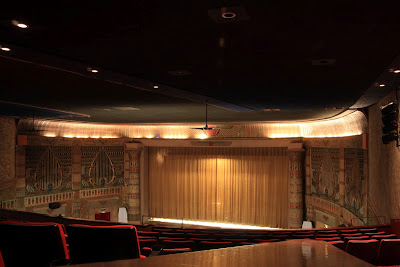 Since then the City, which owns the building, and its partners the Egyptian Theatre Preservation Association, have been working hard behind the scenes to craft a new future for this gem of a structure.  In addition to Herb and myself, they have brought in new fund-raising talent in the form of Cascadia Consultants and most critically a soon-to-be finalized contract with an engineering firm that will revisit the structural issues.   A big problem with the first structural report was that it envisioned a fully-rehabilitated building capable of putting on large scale Broadway-style shows, multiple green rooms, all new systems and mechanical improvements, plus a full code upgrade.  That would all be nice, but much of it isn’t necessary or, in light of the marketing study, logical.  Instead the Egyptian is now looking to a phased rehabilitation and the first phase is simply to get the doors back open, put the public back inside this incredible auditorium, let them enjoy the "Mighty Wurlitzer" once again, and re-tool the unfortunate perception that the building is beyond repair.  As a recent article in the local paper reports, that shouldn’t be too expensive to accomplish and we are hoping to have those doors back open by mid-2013. (see the article at http://theworldlink.com/news/local/egyptian-could-open-in-a-year/article_563ddfe0-b667-11e1-b22a-001a4bcf887a.html) 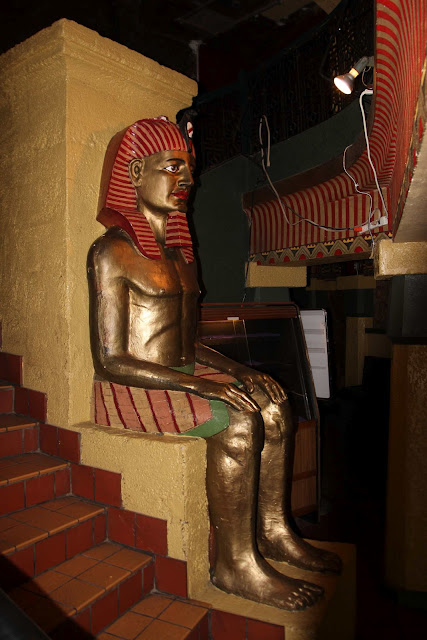 On other fronts, the City is studying the drainage problem that led to fears of the lobby flooding and the ugly sandbags on the street, a paint and patch façade upgrade that will give give the building a cleaner appearance and correct some damage.  Plus there is a REALLY nifty fund-raising concept floating around that will just have to check back to hear about!  The Egyptian is coming back… count on it.  Well Done Coos Bay!
Posted by G. Kramer at 12:47 PM No comments: