There is a discussion, on one of the professional historic preservation listservs, that asks the question “Is the Architect the most important person in a restoration?”  The answers, including my own, tend toward “that depends on the architect” with the general consensus being that a good architect is a valuable element of the team, but the wrong architect can ruin a historic building.  I’ve met both of those architects (My architect friends know that long ago I started to characterize architects as being either “trainable” or beyond redemption.  I don’t work with the latter more than once).
But it is another professional member of the team who can often be more critical to the success of a project, if only because they can either make or break it long before the rest of us even get to start thinking about it.  That would be the structural engineer, a position that has risen in importance in Oregon in direct proportion to the rise in concern over seismic activity and the so-called “Big One,” that we are now taught to call the Cascadia Event.
The general public (read building owners and, unfortunately, too many building officials) tend to get really nervous about the structural integrity of “old” structures that don’t meet current building codes.  (We won’t mention that the building you are sitting in right now, unless it was built last month, probably doesn’t meet current building code either).  Well-meaning people tend to think “non-code compliant” and “unsafe” are somehow synonyms.  They aren’t. 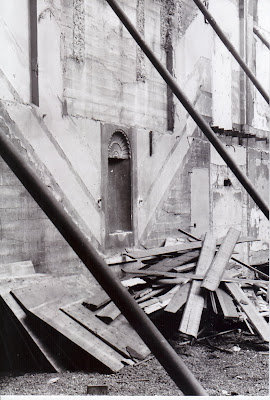 So, why am I writing this?  Well, engineer issues are always at the forefront of project planning and, since I have several projects in that phase, I’ve been dealing with engineers.  Good ones are creative, experienced, and flexible.  The opposite, not quite so much.  Whatever I think about architects beyond redemption, I think about the wrong engineers to an exponential degree.  They can kill a project, and they can do so entirely unnecessarily.  Other times (read school districts) public officials use seismic concerns (founded or not) as an excuse for what they really what to do (See the Medford School District and the demolition of both Jackson and Roosevelt elementary schools a few years ago).
The building community, particularly in this poor economy, has a tendency to beat the drum of public safety related to unreinforced masonry buildings.  I don’t think that this entirely self-serving, but I also don’t buy that it’s the crisis it is sometimes made out to be.  You can retrofit most any building fairly economically to help assure that people will get out in the event of an “event” and, of course, any time you work on a building you should take the opportunity to improve its structural capacity.  But the reality is that you can only rarely save the building without incredible, unsupportable, expense.  And that is pretty much a good thing because it is the rare building (historic or otherwise) that really can justify that expense or merits saving.  Historic buildings are cool, no doubt.  But perhaps investing millions into them just to cover your hindquarters from a lawsuit isn’t the best use of capital.
I was just involved with the planning for a police station, a building you probably want to survive an event, right?  The current, old, wood-frame, building had 1 in 158 probability of collapse during an earthquake.  Moving that use into another, significantly newer and more expensive building, would yield a probably of 1 in 31,600.  Pretty good odds.  But 1 in 158 isn’t all that terrible a starting point. And what NO engineer will ever actually tell you is that there is no such thing as an earthquake proof building.  That city, for considerably less money, will upgrade its existing facility and increase its survival by more than a factor of ten.  Better odds.  An economic study of the cost per life saved from 500 government mandated programs found that seismic upgrade to existing buildings was the single least cost-effective use of dollars.  Not much comfort, of course, if you are injured by a falling building, but perhaps from a policy standpoint those millions and millions of dollars would be better spent improving the safety of our cars and roads.  There is little doubt that it would save more lives.
Given the chance, one of my first recommendations to any client is to be sure they have all the right professionals in place; the architect, the contractor, and the engineer as early in the process as is possible so that each of us can communicate to each other.  It doesn’t always work, but it sure tends to work better than not.
Posted by G. Kramer at 8:30 AM 9 comments:

Steamline Moderne-Architecture on the Move

Streamline Moderne architecture, roughly popular from the mid-1930s to the early 1950s, was an effort to integrate the design sensibility of the so-called “Machine Age” with architecture and new technologies.  Owing much of its inspiration to industrial designers like Walter Dorwin Teague and Raymond Lowey, who transformed everything from trains to toasters into works of art, Streamline Moderne is often linked with Art Deco (another indistinct term) but in reality is much different.  Whereas Deco was often flamboyantly, well, decorated, Streamline is the architecture of the wind tunnel, the machine.  The best examples of the style have rounded corners, smooth, usually stucco, surfaces, portal-type windows or large banks of glass block.  In the day, Streamline Moderne owned more to the design of cars and planes.  It was architecture of movement, that looked like it was going somewhere, a characteristic that once caused Frank Lloyd Wright to famously respond to a question of his own lack of interest in the style by stating that when “HE” built something, it stayed put. 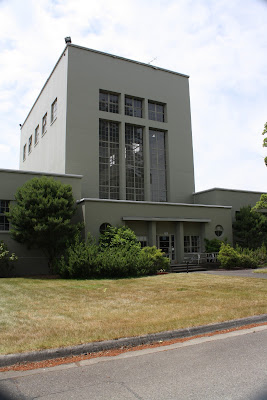 Moderne, achieving popularity during the Depression and continuing into the postwar period, was adopted for an entire host of new building types linked to technology.  As a result, I run into them often and have always rather been fond of the style.  Many of the early Control Houses and related buildings of the Bonneville Power Administration were designed in Streamlined Moderne and those that remain are textbook examples of industrial architecture looking for new forms to house new, and “modern” technology, as shown at the Covington Untanking House.  Gas stations were also often built in the style, as in Walter Dorwin Teague's famous designs for Texaco.  The three lines at the cornice are literally called "speed lines," as shown in this fine example from La Grande, Oregon. 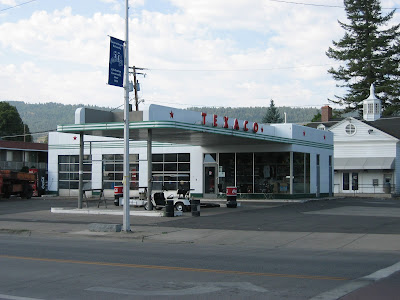 I’ve always had a mild desire to write a book on Streamline, which gets short shrift in most architectural histories and is in and of itself the subject of just a few studies of any quality.  Often lumped with, and always over-shadowed by Art Deco (which, let’s face it, makes for better images) or even WPA-Moderne, Streamline Moderne is often mis-understood and little appreciated or just confused with other styles.
Last week, on my way along the Gorge toward eastern Oregon, I drove around The Dalles and stumbled across their absolutely amazing high school, completed by an architect unknown in 1941.  It’s a great great building....certainly worth more than few photos. 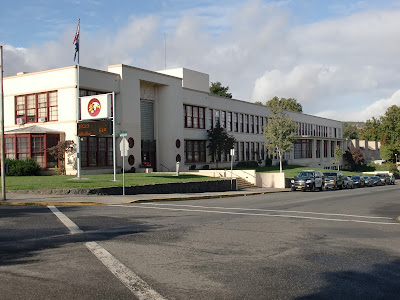 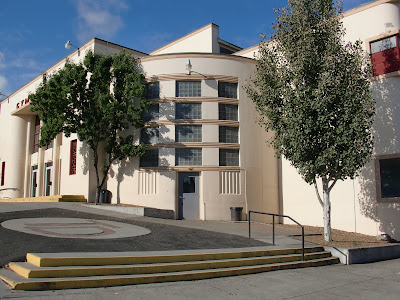