There are some truly great buildings in Oregon and I am always surprised when driving from Point A to Point B to stumble across something exceptional for the first time.  Long ago somebody wrote a book on residential architecture that was entitled “A Gift to the Street,” or something like that, meaning a building that everyone benefitted from, even if it was built for a specific purpose and owner.   There is such a gift in Linn County, on Richardson Gap Road east of Scio, on the way to the Larwood Covered Bridge (another gift, let me assure you).  As I was heading north, I saw a large, white, boxy thing in the distance and thought “What the heck is THAT?” 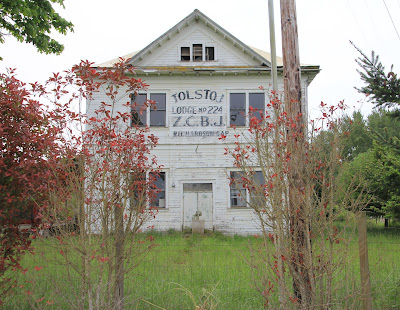 It was, like the sign says, the Z. C. B. J. Lodge, a fraternal order of Czech-Americans, that was built in the early 20th century (1911) according to the National Register listing.  It’s a great building, made all the greater because of where it is located, in the middle of still largely rural, sparsely populated, part of the county.  Sure, it has great architecture (notice the dentil-like projections on the boxed soffit?) and the great wide frieze and all those other Classic Revival elements that make buildings like this so familiar.  But what I think is REALLY great is what it says about the people and the community that built it.  There must have been a LOT of Czech-Americans in the Richardson Gap Road area at the turn of the 20th century.  And they must have had not only a strong community but every expectation that it would survive and grow.  Why else would they have built such a large and imposing structure? 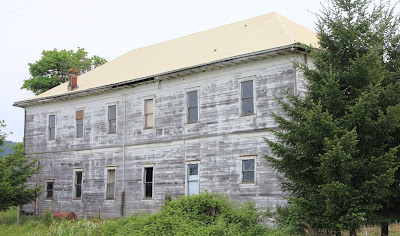 I don’t know what happened to them, or why the Lodge was apparently converted to a private dwelling at some point.  I don’t know why (but appreciate) that nobody ever painted over the old sign on the north-facing elevation.  But I am betting that nobody in Lodge No. 224 ever expected that a future use of their fine lodge hall would be as a basketball court.

ADDED:
Here is a great link on the history of the Czech community in the Scio area, including some more detailed information on the Lodge....thanks, readers, for sending this along!
Czech Footprints in Oregon

Truth be told, I am not a huge fan of classical architecture or its various revivals.  This is generally not  a problem, there being comparatively few Greek or Roman-inspired buildings in the smaller communities where I tend to work.  And, while I am as entranced by triglyphs and metopes as the next guy (look them up), I mostly think they would be fantastic names for two cats (something that never seems to gain much traction with my family).

There are, however, elements of classical architecture that I find useful and “dentils” are among that category.  Cyril Harris, of the iconic Dictionary of Architecture & Construction, defines a dentil as “…one of  a band of small, square, tooth-like blocks forming a part of the characteristic ornamentation of the Ionic, Corinthian, and Composite orders, and sometimes the Doric” (I rather love Harris’ “..and sometimes the Doric” but that’s just me).

Today most people buy dentil bands by the foot, of extruded polystyrene or similar materials, often, but not always, for interior use. They used to buy them out of sheet metal, from companies like Berger Sheet Metal, above.  But in vernacular architecture, dentil bands were just simple elements of a frieze, typically made of wood.  They can be found in all sorts of late-19th century homes, often around the porch or entry, and remained popular through the Bungalow and into the Colonial Revival styles.  They’re easy to construct, create great shadow lines, and, at least in my opinion, are attractive and not overly fussy elements.

We found evidence of dentil band on a small, otherwise pretty unassuming, house in Talent last month and I was interested that the original builder took the trouble to “fuss” up the porch.  It’s a simple design, made from two different sizes, and thicknesses, of wood blocks attached to a plain frieze.  We’ll re-create its as part of the rehab of the building and the removal of the tacky aluminum siding. 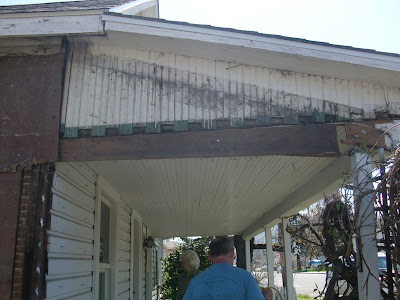 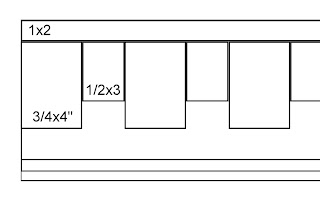 As a final note, this marks the 100th preserveoregonblog post, something of a milestone from the past 3 1/2 years of ruminating on old buildings.  I enjoy writing these, hope you enjoy reading them, and that maybe they increase your curiousity about the built world around you.
Posted by G. Kramer at 9:53 AM No comments: