Penstocks of the Past, and Future

Having spent most of mid-April dealing with the high style design issues of the Holly Theatre, this past week has seen a return to the more typical aspects of report writing, including covered bridges and compliance documentation.  Staring back at me from my computer screen at the moment is PGE’s Faraday Powerhouse, on the Clackamas River. 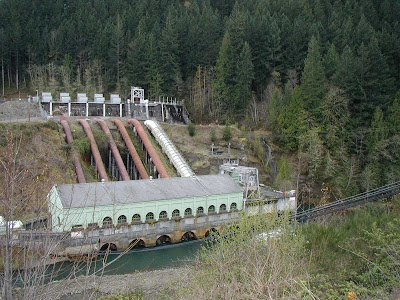 “Penstocks” are the feeder tubes that connect a reservoir to the turbines that spin a generator to create electricity.  They are usually large concrete or steel pipes that drop significantly in elevation to create “head,” increasing the force of the water and spinning the turbines efficiently.  In more recent projects (post-WWII) penstocks are typically underwater, at the bottom of a dam, and so unseen.  But in an early hydro project, like that at Faraday (which was built in 1907-1909), the penstocks are exposed and become highly visible features, dropping from the crest of the dam, down an embankment, to the powerhouse.  Faraday's penstocks are typical, in that these early powerhouses tend to have multiple, smaller, generation units rather than one or two large ones, and so the penstock lines can be pretty dramatic through repetition. At Faraday there are six penstocks, five built by 1909 and one, Unit No. 6 (the larger one, at the extreme right above), that was added in 1956.

Faraday’s original penstocks are of riveted steel, between eight and nine feet in diameter, and are supported by multiple concrete piers with small semi-circular “saddles” where they meet the steel penstock itself.  This has worked well for over a century, but where the concrete and the steel meet, water is trapped.  Steel and water are a bad mix, and one thing you surely do not want is a weak, rusted, spot in steel tube carrying 1/6 of the Clackamas River at high pressure.

PGE has creatively developed a solution to repair the damaged spots and then modify the top of the concrete piers to re-seat the penstocks with a steel-to-steel connection.  This will reduce the potential for damage and allow the Faraday penstocks to continue to operate into their second century. 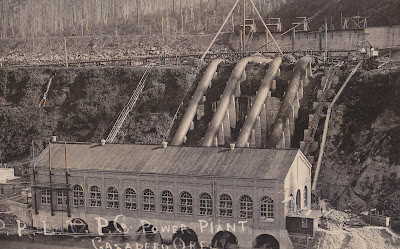 People tend to glaze over when I talk about my interest in hydroelectric generation, penstocks, flow lines and the like and many of these early projects are criticized as unnecessary and un-green.  That's another rant.  Last night I was amused, while watching NBC's filmed-in-Portland fantasy-drama show Grimm, to see that PGE's now-decommissioned Bull Run Powerhouse (built prior to WWI) played a major role.  It’s a shame, and an interesting comment on how our society has changed, that only few people still see the postcard potential in engineering marvels like these early, small scale, powerhouse projects.  Think about that during the next power outage, or when you drive through a sea of wind turbines.
Posted by G. Kramer at 8:26 AM 3 comments: 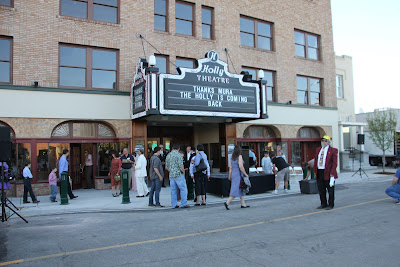 About 1000 people showed up to witness the Grand Relighting of the Holly Theatre in downtown Medford.  It was a beautiful night.  Workers were putting finishing touches on less than 30 minutes before the event was scheduled to begin but somehow everything got done and the building looked fabulous.  Now, once the JPR Foundation raises the money, we turn to the interior! 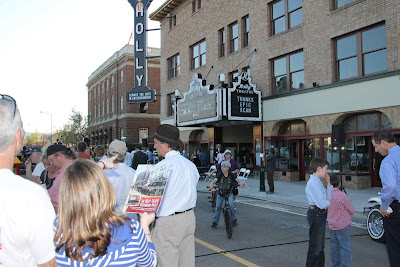 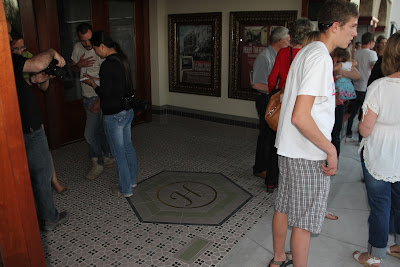 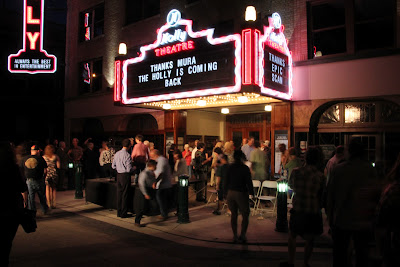 Since I have spent virtually all of the past two days at the Holly, I thought I 'd quickly share some progress photos.... 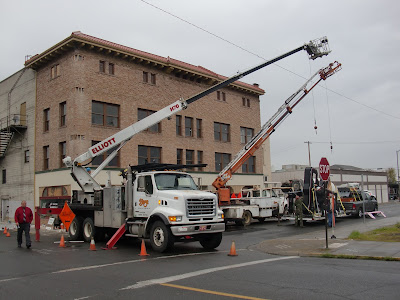 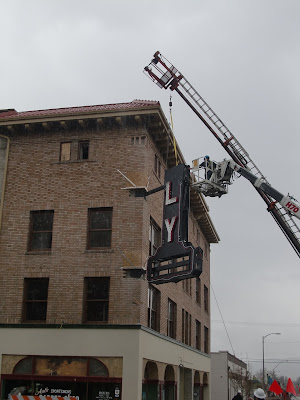 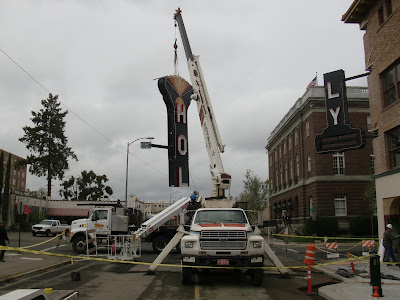 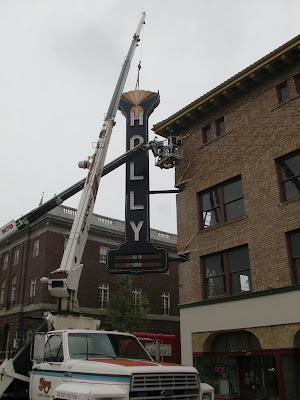 And not all the fun was up in the air... Here Mark and Joel are doing the layout for the tile in the entry foyer.  Thrilled to see it finally going into place! 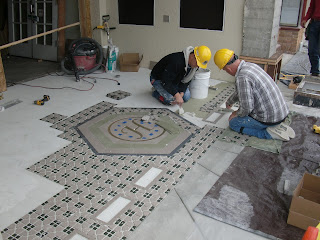 It is crunch time at the Holly, as all the various pieces floating around the nation start arriving on site.  Yesterday, around noon, I counted more than 20 workers on-site, pulling electrical lines, painting, placing and forming concrete for the sidewalks, working on the new storefront doors, plastering the foyer, prepping for the sign installation next week, not to mention work on the interior. 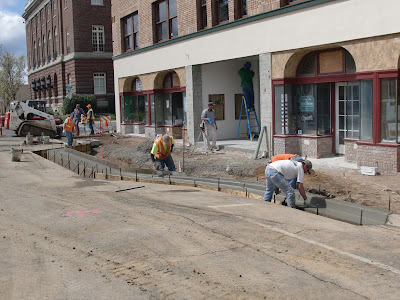 Amid all the chaos, there are still design decisions to be made, as we try to work out the connections between the various elements of the facade, several of which (the marquee, the wooden corner cases) have yet to arrive on site.  I trust that everything will work out, but there is still a lot of head-scratching and pointing going on.  Yesterday, on what amounted to my third trip to the project (this to finalize the score lines in the front sidewalk and their relationship to the six bollards), Steve Kammerzell, the project manager for Hammonds Construction yelled at me just as I was leaving and excitedly showed me the following photo on his phone! 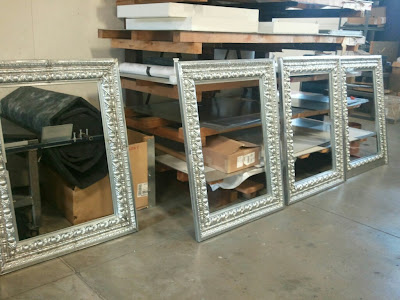 These are the four poster case frames, for the exterior, foyer, assembled by Advanced Sheet Metal and made from pieces of formed metal from W.F. Norman & Company, of Missouri.  I really like Norman’s products…they are authentic, attractive, and pretty inexpensive.  After the glass doors are mounted, the entire unit will be finished to a deep gold/bronze and will accent the walls of the foyer, just outside the main entry.  (You can see two of the "holes" for these cases in the top photo)

One week and counting….  By Sunday the sidewalk will be done, the foyer will be painted, the crown molding we removed for construction will be re-installed.  Monday sees the arrival of the 33-foot tall neon pylon sign and the projecting marquee and we being laying the ceramic tile in the exterior foyer, the installation of the restored leaded glass above the storefronts and dozens and dozens of other details.  What fun!
Posted by G. Kramer at 8:23 AM No comments:

The Relighting will be Grand-Holly Theatre

In between working on covered bridges and power projects, the Holly Theatre slowly inches towards its “Grand Relighting” ceremony, scheduled for April 21.  By that time the two huge signs should be installed, the new doors, the beautiful door hardware, and poster cases installed, the sidewalk and incredibly elaborate ceramic tile will be in place and all the windows cleaned, repainted, and looking presentable.  It’ll be a busy few weeks as products stream in from around Jackson County and beyond, and workers from Hammonds Construction race to finalize all the details on schedule, and as all of the logistics associated with this exciting project for the JPR Foundation and downtown Medford come together.  All in all, it will be a memorable evening. 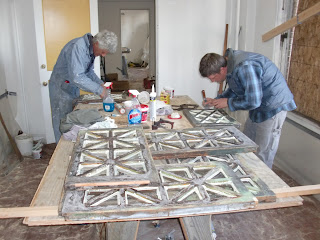 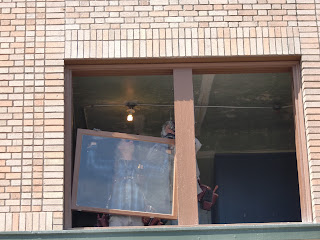 Here are some current photos, just to whet your appetite.  The scaffolding came down last week, once the roof and cornice work was complete and the damaged portions of the brick were repaired.  Above Jay and Noah Treiger are repairing the incredibly complicated casement windows of the 4th floor (Jay says there were over 400 corners!).  In the next photo the guys are re-installing the original windows of the 2nd floor, after they have been entirely restored.  They look great!  Below is a 'progress' shot from AlphaSigns, who are working on the mammoth 33' tall pylon sign that will be installed at the corner of Holly and 6th streets 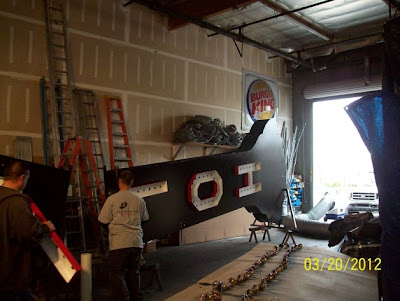 Be sure and mark your calendar for April 21, 2012.  The events will start around 6:00 or so and once it's good and dark out JPR and the City will "flip the switch" on the blade sign and the marquee.  It won't be dark then!