In 1903 two brothers, Dr. C. R. and Frank Ray, were involved with the Braden Mine, a fairly large operation east of Gold Hill, Oregon.  Dr. Ray, who must have managed his far wealthier brother’s investments, convinced Frank that the mine would be more efficient if it operated on electric power rather than steam and so the two brothers set about acquiring property on the Rogue River near Tolo, to build a dam and powerhouse.  The Gold Ray Dam, as it is known, was completed as an arched timber structure in 1903-04 and the concrete powerhouse went into operation, powering the mine.  Soon the Ray’s realized there was more money to be made selling electricity to others than in mining.  Their company evolved first into the Rogue River Electric Company and then, after a merger with the Siskiyou Electric Power & Light Company, of Yreka, California in 1911, formed the California-Oregon Power Company.  COPCO, as that company would become known, remained the primary power provider for most of southwestern Oregon and northern California for the next fifty years, until it was merged into Pacific Power and Light, now PacifiCorp,  in 1961. 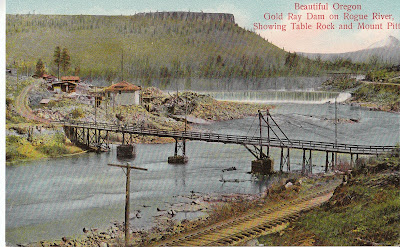 Gold Ray Dam, which produced just 1.5 megawatts of power, a small output, kept chugging  out power as the water flowed.  A new concrete dam was built in 1941 and COPCO periodically considered expanding the old plant but never did.  The 1905 generation units, connected to the turbines by rope drives, and the original switching gear, all mounted on marble panels as was typical of the times, are all still there.  By 1972, after much study, PacifiCorp determined that the old pioneer Gold Ray Hydroelectric Project was no longer economically viable, as fish passage issues and the rest continued to increase costs that could not be offset by its small power output.  They donated the dam, and the powerhouse, and about 27 acres surrounding it at one of the prettiest little spots on the Rogue River, to Jackson County, which had dreams of developing it as a park and historic site celebrating what very nearly amounts to the birth of electricity in the Rogue Valley.

That dream was stalled, first by a County plan to put the powerhouse back on line, and finally just by lack of funding.  The powerhouse fell to vandalism, and disrepair.  The dam became an increasing obstacle to fish passage and calls for its removal grew.  Some appreciate the wetlands upstream of the dam but the reality is that the Gold Ray Dam has, at least at the moment, outlived its usefulness.  This year, as part of the President’s stimulus package, the County has received funding to study alternatives for the future of the Gold Ray Dam, ranging from removal to rehabilitation and renewed power generation.  There is the potential for more funding to improve fish passage on the Rogue if the removal option is determined to make the most sense but the county will wisely explore all of the possible alternatives for Gold Ray before making its decision. 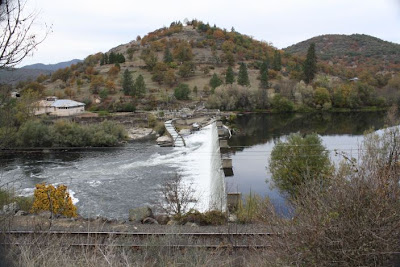 Over the next few months, shooting toward an in-water work window next Summer, I and an entire gaggle of others will be looking at all the various impacts that removal, or rehabilitation, will have on the Rogue River and, at least in my case, on the history that the Gold Ray Dam and Powerhouse represent.