Tomorrow and Thursday I will be in Coos Bay, on the Oregon Coast, as a dedicated group from the City and the Egyptian Theatre Preservation Association take the next step in developing a plan to bring this gem back to public use.  They are still dealing with the ramifications of an unfortunate study that resulted in the building's closure, causing ripples of concern about whether it could ever be repaired and even whether doing so was worthwhile. 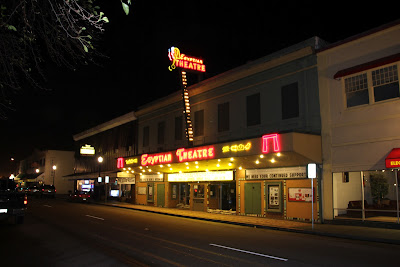 I've written before about engineers, and the value of getting the right ones involved, and needn't do so again.  But even closed the Egyptian Theatre, while still "endangered" is making progress toward life.  And clearly it's a "wonderful thing," well worth preserving.  If you don't believe me, check out this slide show somebody put together.  For the moment, when access to the building is so limited, its the best way to convey the wonders within that bland facade.

Egyptian Theatre Slide Show...CHECK IT OUT!

Wall Graphics... It was TASTIER!

Wanna solve a puzzle?  This painted wall graphic was recently uncovered on a downtown building in Medford, Oregon and we’d like to try restore it.  The only problem is that I can’t figure out what it actually says! 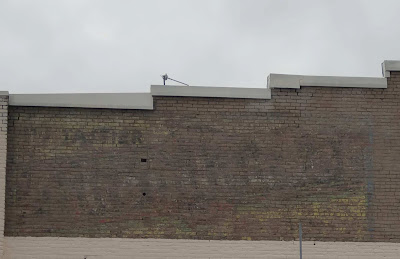 The corner of Main and Central is pretty much the heart of the community and this building, built in the 1880s has hosted a series of signs over the past century-plus, advertising a photographer, a local fountain, Signal Gas, Coca-Cola and what seems to be a never-ending series of drug stores.  Pieces of all of those “ghost” signs are visible, in bright yellows, greens, blues, reds and blacks.  About the only thing that IS clear is the block lettering “It’s Tastier” in the upper left corner and the diagonal swatch of some script black lettering that cuts across the sign. 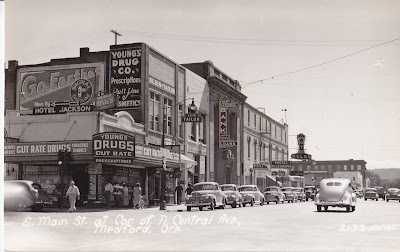 It would be great fun to restore something here (but not too much…I don’t want to look new) but I sure would like to find an image of what it was.  Historic photos have been no use (they show other signs here, but not the It’s Tastier one, which I think must have been in the 1930s, perhaps even earlier.  I’ve tried internet searches, including looking to see if “Its Tastier” was associated with some particular brand (all I can find is Pabst Beer, and I just can’t see “Pabst” anywhere in this graphic).

Ben Truwe, a tiger on the historic hunt, figured out this sign advertised Rheinlander Beer and the internet supplied a copy of a pretty similar looking graphic.  Here is a mock up of what the repainted sign would look like.  Unfortunately the property owner, for reasons unknown, now appears to have changed his mind and wants to just paint the wall.  No matter....we'll get another chance to restore the sign in 15-20 years.  They don't call 'em "Ghost Signs" for nothing...they keep reappearing. 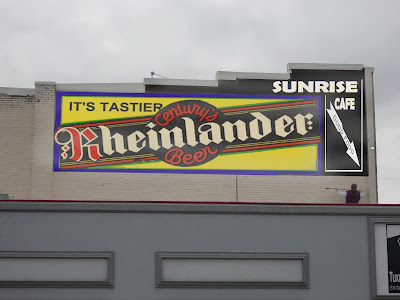 Cornice Rosettes at the Holly

Work on the Holly Theatre, in Medford, continues, as the paint referred to a few weeks ago, is in the process of being applied, weather permitting.  The lower brick, at the storefronts, has been removed.  HydroStrip, by Devoe Coatings, is a great product…non-caustic, water-soluble and pretty effective (although the painters may have some input on that last point).  No matter how you look at it, it sure beats sandblasting or a total reliance on elbow grease! 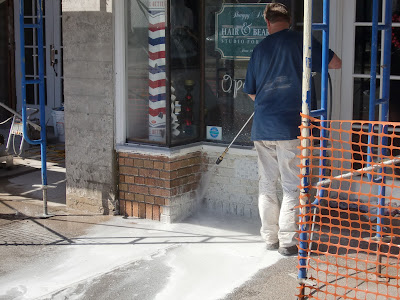 One interesting discovery has been at the opposite end of the building, the projecting cornice.  This is a fine sheet metal element, highlighted by strong projecting dentils and rosettes.  Preliminary paint analysis indicated that it had only been painted twice, with a yellow-tan above the galvanized surface and then a deep brown.  While it may have been left natural upon the building’s completion in 1930, I’d pretty much determined to repaint it in a yellow-tan, “Danish Pine,” from Miller Paint’s excellent historic colors series.  Early last week the guys were up there doing paint prep and I got an excited call about the rosettes, which turned out to have been far more poly-chromed than we’d realized.  (There is a peril in having only a few photos of the exterior, none of which actually show the parapet). 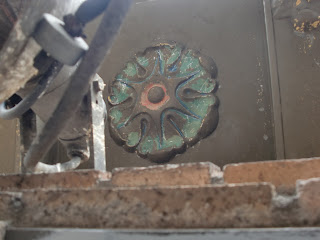 At any rate, after a certain amount of head-scratching, we are, of course, going to replicate the three-color (Green/Blue/Red) design of the rosettes.  Much of this will be hand work, 40 feet up in the air, probably lying on your back.  The painters are joking that it will be like Michelangelo painting the Sistine Chapel.  While I’m not sure that is accurate (although the rosettes should be pretty spectacular when they are done), I am pretty sure that I’d best be showing up donuts or something for the painters.
Posted by G. Kramer at 9:12 AM 4 comments:

Jacksonville, OR- Standing the Tests of Time

The city of Jacksonville, Oregon, located five miles west of Medford, has a great history.  Founded in 1852, as “Table Rock City,” for a short period it was the largest city in the Oregon Territory, as 1000s of young men arrived after the discovery of gold on Jackson Creek.  Jacksonville, the self-styled “Queen City of Southern Oregon,” was the county seat, a major factor in the Champoeg convention to establish Oregon statehood, and her leaders were prominent throughout the state. 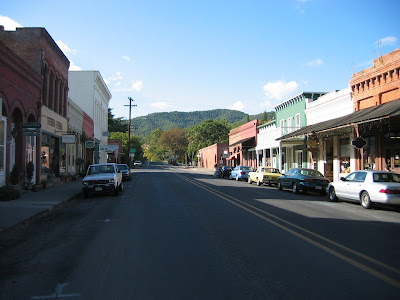 Then the railroad arrived, in 1883, and bypassed the city in favor of the “new town on the valley floor,” being Medford.  Railroads, for obvious reasons, like straight lines and Jacksonville, in a hilly nook of the valley, was too difficult a location (that and they wouldn’t pay the railroad’s “Bribe,” but that’s another story.”

In 1927 big bad Medford “stole” the county seat from old fashioned Jacksonville.  Two years later the Great Depression set in and about all Jacksonville had going for it was cheap housing.  I once wrote, in the Jacksonville Historic Context, that after 1887 and the arrival of the railroad, for Medford and the other towns along the line, there would be no looking back but for Jacksonville, though they didn’t quite realize it yet, “looking back was all that remained.”  A nice turn of phrase, if I do say so myself.  Put another way, history IS the economy in Jacksonville and really has been since the end of the WWII.  Hal Gard, the ODOT archeologist once told me that “you can’t shake a shovel in Jacksonville without hitting something historic” and that pretty much is still true.  Most of the original town plat  was placed on the National Register of Historic Places in 1966, in reality before there was much of a process in place about how one actually put a district on the register (the original nomination for the Jacksonville Landmark Historic District is about 5 pages long… a cover sheet and list of addresses).

Jacksonville takes its history seriously, entrusting design review to HARC, the Historic Architecture Review Commission, which has a strong authority over almost all exterior modifications and new construction in the city.  Later this month HPLO will be in Jacksonville, for its first Preservation Roundtable of 2012, talking about the perceived challenges associated with early masonry buildings.  It’s a perfect place for that discussion, since almost all of Jacksonville’s downtown core along California Street (aka Oregon State Hwy 238) are pre-1900 brick that have been bouncing along with log trucks and the earth below for far more than a century with aplomb.  If you happen to be in town, on Friday March 16th stop on by, as I’ll be leading a walking tour between a few stops where property owners will be talking about their buildings in depth with the HPLO group.
Posted by G. Kramer at 9:25 AM 1 comment: