When people call me about the possibility of getting their house on the National Register I am frequently uninterested. Not that they aren't nice people, or nice houses, but usually it's a fully restored "Victorian" or a bungalow in some older part of town. While such places are lovely, they only rarely have the qualities to make them more than a contributing property in a historic district, one that the community hasn't gotten around to pursuing as it should. So, when the party on the other end of the phone has a different tale, it gets my attention. 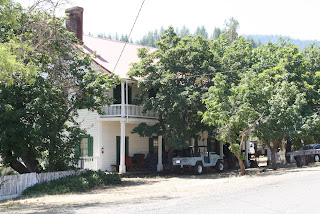 Last week I was in northern California, looking at a house that has been owned by the current family for over a century.  In 1909 the family had purchased it from the people that had built it in 1851-52. Two owners, essentially, in 158 years gets my attention. So did the property, the Forest House, built on what became the Shasta-Scott Valley Turnpike, a toll road west of Yreka, that became Highway 3. The toll road was built by (wait for it) Horace Knight and Marshall Short, the first owners of the Forest House. This imposing two-story structure, with a full double porch, is almost entirely intact. Most of the original furnishings remain, along with everything else.  It even has the ledgers from the various 19th century enterprises that were focused on this outpost of civilization: a hotel, a distillery, a fruit orchard, an ice plant, a sawmill, and most anything else that would make a fella a buck at the side of the road. 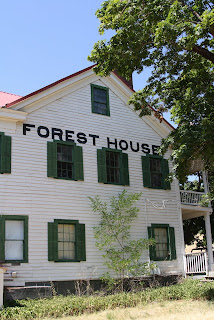 So, over the next months, we'll work to get the Forest House on the NR as the first step in an effort to find some funding to make sure it survives. Unfortunately Messrs. Knight and Short built the structure with what was on-hand, in this case full 12" round log floor joists, all with the bark in place. Beetles, and perhaps termites, have found that old growth just irresistible with the result that the building is slowly compacting the powdery wood. Some rooms, like the upstairs ball room that occupies an entire side of the house (there are dance programs for its events in the lobby) now has a floor that looks like a wooden ocean wave. The current generation, who have inherited responsibility for this amazing piece of California's pioneer history, take that responsibility seriously. We're looking forward to helping them help the Forest House.
Posted by G. Kramer at 8:18 AM