More on the Holly Theatre, Medford

On Monday the JPR Foundation held a public meeting at a generous Medford restaurant to present its vision for the renovation of the Holly Theatre as a performing arts center.  About 50 interested folks and most of the local media showed up, to hear about the building’s history and its future.  It was a productive meeting, and hopefully will push the City of Medford to provide some seed money to kick start the building.  Here’s a link to the local newspaper story:
http://www.mailtribune.com/apps/pbcs.dll/article?AID=/20110524/NEWS/105240320
One of the most exciting results of this meeting, at least for me, was that a local who in his own words “grew up at the Holly” (his father was the theatre manager) brought in some plans for its last major remodel, in 1976.  I have been searching for any plans of the building, as a way to help guide us as to what it originally looked like. 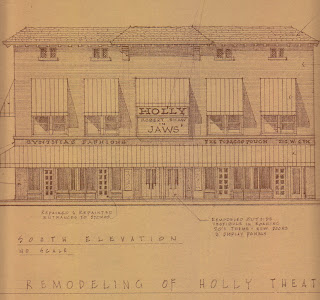 Of course knowing the original design is a key tool in restoring it and while poking around the building will occur, it’s good to have some documentation to point that poking in the right direction.  At the Cascade Theatre, in Redding, California, we sometimes had very little to go on (those are remnants, threads, of the original carpet below...we found them under the plate of a non-original partition wall and extrapolated the carpet colors from them). 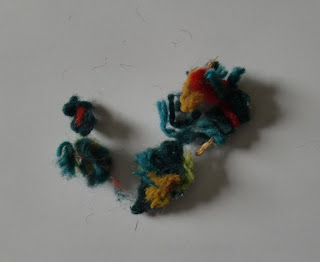 Thankfully, at the Holly, we have an entire room that still has its  carpet but I sure would like to find more information on the original design- the seat fabric, the curtains, the lighting AND and the original plans, to go with the drawings from 1976.  We'll keep looking and, if things go as they often do, we'll find somebody that squirreled them away eventually.
Posted by G. Kramer at 8:40 AM