Medford’s Façade Improvement Grant Program keeps moving forward and transforming downtown buildings one storefront after another.  These past few weeks I’ve been working on the eastern portion of the Hamlin Building, one of the oldest structures in downtown.  Built in 1888 it was originally a vernacular Italianate form, with exposed red brick, arched windows and central stairwell that divided the façade into two symmetrical bays. 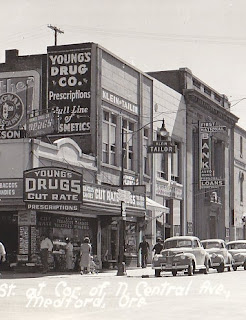 Fast forward to the 1930s, the second generation of the Hamlin family split the property after a legal dispute and the west half was modernized.  Not to be outdone the Miles family, the heirs that owned the eastern half, covered the old brick with a mixture of stucco and panels in the latest Art Moderne styling in the late 1930s, probably with the assistance of local architect Frank Chamberlain Clark.  Clark’s offices were on the second floor for many years.
The east half of the building was again remodeled in the 1960s and 1980s and by early October was in need of some TLC.  The heavy metal awning, mounted on what turned out to be panels of Masonite loosely attached to the lower façade, was failing and threatening to collapse.  Once the awning was removed, the Masonite came down, exposing the series of remodelings, and even including a glimpse of the original brick exterior.

We’re working with the owners, a great-grandson of Mr. Hamlin himself, on a new façade treatment that will try to create a more unified, and durable, lower façade, while painting the upper to accentuate its fine detailing.  A new awning, and new signage, will help support the success of the current occupant, a restaurant, or any subsequent tenants. 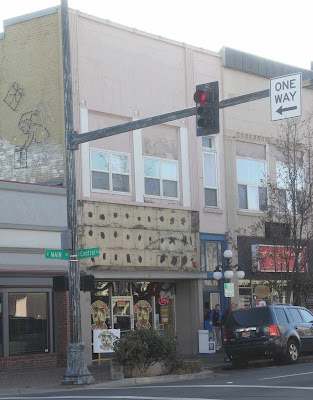 The façade projects in Medford aren’t always strictly by-the-book preservation in the normal sense, but we certainly take the lessons of preservation and use them to create what are hopefully more attractive members of the streetscape.  The program has been incredibly successful, addressing more than 90 buildings in the past 8 years and winning the James C. Howland Gold Medal from the National League of Cities for excellence in “Urban Enrichment.”
Posted by G. Kramer at 6:36 AM