This Friday the State Advisory Committee on Historic Preservation will review the Willamette River Highway Bridges multiple property submittal.  This is a document on the significance of the ten major spans across the river in Multnomah County and includes the formal nomination of four bridges; Hawthorne, Morrison, Burnside and Broadway.  I started working on this project almost two years ago and in the process found a new appreciation for each of these amazing spans.  Almost every Oregonian knows the bridges in downtown Portland, from the “erector set” Marquam, to the soaring Fremont and most of us, I like to think, have our favorites.  They are an amazing group of spans, probably unmatched anywhere in the country, certainly on the West Coast, if only for their diversity.  From the Hawthorne, which is the oldest vertical lift bridge in the nation, to the St. Johns, the longest suspension bridge in the world when it was completed, to the Morrison, the first bascule bridge designed with open  piers to allow water to flow directly through them, Portland does bridges with panache.  It was fun to study these works, and honor to be able to document them for much-deserved recognition on the National Register of Historic Places. 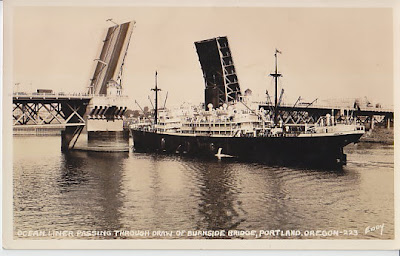 If the Willamette Bridges are the pinnacle of bridge technology in the middle of Oregon (vying with McCullough’s coastal bridges for State-wide honors as a group), they surely are not the only spectacular spans in Oregon.  As I wrote many years ago, getting around the state Oregon, a state replete with creeks, rivers and crevices, without bridges would be darn near impossible.  And Oregon has always taken its roads, and its bridges, seriously.  We still do.  Covered Bridges, those comfortable, quaint, roofs over rivers were a popular form in Oregon where wood, just like rivers, can be easily found.  For years I have worked on the rehabilitation of numerous covered bridges, usually as a part of a team headed by the great guys at OBEC Consulting Engineers.  Together we’ve been involved with the rehab of award-winning projects like the Lowell Covered Bridge or, more recently, the Chambers Covered Railroad Bridge. 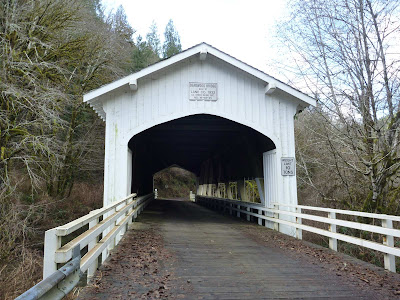 This week, on my way up to Portland, I will swing through north central Lane County, where the Deadwood Covered Bridge is soon to get a new shake roof and some other minor but much needed attention.  Deadwood, like so many of Oregon’s 50+ surviving covered bridges, has been bypassed by a typical slab, beam and girder (i.e. pretty boring) concrete span.  Thankfully the good people of Lane County had the vision, and the continued willingness, to retain the Deadwood, and a bunch of other covered bridges, for their history and charm.  Lane County has the largest collection of covered spans in Oregon, which as the largest collection of such spans in America west of the Mississippi River.