In the 1870s, if you took the stage coach from Scottsburg or the Willamette Valley to southern Oregon, the route went through an area north of Yoncalla, over Pass Creek.  To make that busy passage easier, somebody, probably the stage company built a bridge.  A wood truss, covered bridge.  A bit later, after Charles Drain purchased 340 acres from Jesse Applegate and set up what first became Drain’s Station and is now the city of Drain, the Oregon & California Railroad came through and followed the same route.  They too built a bridge over Pass Creek, another wood truss, covered, span.  The railroad replaced its wooden bridge with a new steel through truss bridge.  This much is certain.  Another thing that is certain is that the City of Drain, which owned the smaller covered span, relocated it for use as ped/bike bridge in 1987, where it remains, after replacing it at the original location with a mundane concrete slab. 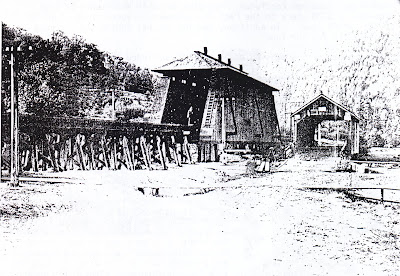 But what isn’t clear, and is one of those gnawing little puzzles that drives me crazy, is what is the connection, if any, between the 1987 bridge and the 1870s bridge.  Most sources date the Pass Creek Covered Bridge, the only one of three similar bridges that stood in Drain, as having been built in 1925.  The problem is I haven’t found any primary sources to support that.  No ODOT drawings, no reports in the paper of “bridge construction.”  Nothing.  (Though I AM still looking!)  Several old-time locals report the current Pass Creek bridge (meaning the one that is now in the park) was built in 1906, or was “rebuilt” in 1925, using some portion of the earlier span.  There isn’t any documentation for either of those projects either, at least none that I’ve found.  Photos show that the design of the portal changed sometime after 1906, and the pitch of the roof was lowered.  Was that the “massive rebuild?”

Here’s what we do know.  The existing bridge is just about the same size as the historic one and the trusses have hand-hewn top and bottom chords.  Now Drain, in northern Douglas County, was like so many cities in that region (especially ones on a railroad line), a mill town and it’s hard to believe that even in 1906, when there were multiple mills within a stone’s throw of the bridge site (Pass Creek provided water power) that anybody would take the trouble to HAND hew a chord.  And surely NOBODY would do that in 1925, so it seems logical that they reused the truss, and just changed the roof and modified the portal.  At least that's what I think. 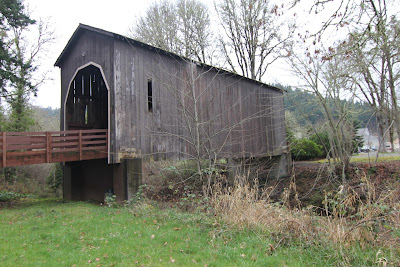 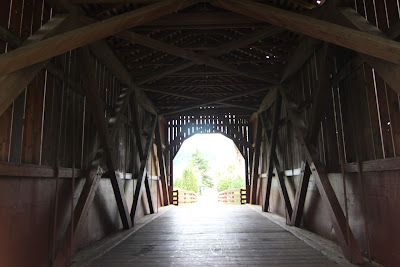 At either 1906, or perhaps even the 1870s, the Pass Creek Covered Bridge may have a legitimate claim as the oldest covered bridge in Oregon  (the Drift Creek Bridge, in Lincoln County, was built in 1914).  Bill and Nick Cockrell, in their revised Roofs Over Rivers, the definitive guidebook to Oregon’s covered bridges, date Pass Creek as “1925 (1906).”  Fred Kildow, another covered bridge expert, in The BridgeTender, wrote “…this just might be the oldest continuously used covered bridge location in the state.”  And it just might.   If there is any of the 1870s bridge left, you might not need the “covered” limitation either.  I certainly can’t think of a standing bridge, any standing bridge, in Oregon built before 1880.  Can you?
Posted by G. Kramer at 8:47 AM