Although the field and much of its infrastructure is called “preservation” the reality is that a large percentage of what is reviewed by the State Historic PRESERVATION Office, or NPS’s Technical PRESERVATION Services division, is better described as “rehabilitation.”  Rehab, in this world, involves transforming a building or structure to a new use or updating a continuing use in a manner that is respectful of history.

Determining where the line is between respect and remuddling is often subjective and it can even be a source of disagreement among “preservation” professionals.  I recall a project from years ago in which a pioneer era structure was to be rebuilt (from the ground up, it had been entirely lost) and there was considerable and heated debate about whether the sills and floor beams had to be hand-hewn timbers or if they could be the less-expensive and likely more durable, pressure-treated lumber.  On the one hand nobody was ever going to see the beams, beneath the floor boards, and on the other the original did have hand-hewn timbers.  I thought the former was nice but unnecessary and pushed for pressure-treated.  Others thought the presence of PT amounted to sacrilege. 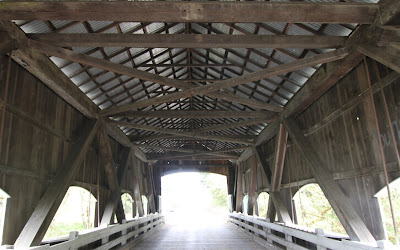 “Preservation” v. “Rehabilitation” has reared its head in on-going discussions surrounding covered bridges.  The small number of covered bridges that survive in Oregon (about 50 out of more than 400 we once had) are beloved in their communities (and Oregon, despite the losses, still has more covered bridges than any state west of the Mississippi).  The issue, simply put, stems from the undeniable fact that there are good reasons why Oregon’s public works and state transportation officials have replaced covered bridges over the years.  Wood over water, in western Oregon, isn’t a great match.  Wood rots, and it needs to be replaced.  Concrete may not have as much character, but in times of diminishing budgets, it’s a heck of a lot easier to maintain.

To compensate for that fact, there are special sources of money to keep covered bridges standing, and that makes sense not just to keep them as functional elements of the transportation system and our history, but from an economic development and tourism standpoint.  For example, I was at a covered bridge a few weeks ago, the McKee Bridge, way out in the Applegate Valley.  They have a register for visitors to sign.  There were people from all over North America that had driven 30-40 miles off the Interstate to see that bridge.  That’s a good thing, and justifies the expense of retaining these iconic structures.  It's rare to visit a covered bridge that somebody doesn't stop by to take a photo, check it out, or lay out a picnic or something.  Oregonians, Americans, love covered bridges.

But keeping them standing requires regular maintenance. And, at the same time that public money is drying up, the quality of timbers is declining from the old growth that bridge-builders used in the early 20th century.  That means that even if you can get the large timber members needed to build certain elements in a covered bridge, they don’t have the same carrying capacity of the old growth, because the wood isn’t as good.  And then, of course, modern vehicles, especially trucks, are much much larger than they were in 1930 or 1940, so if a bridge is to carry legal loads as part of the transportation system, the new timbers ought be carrying MORE weight than the original design. 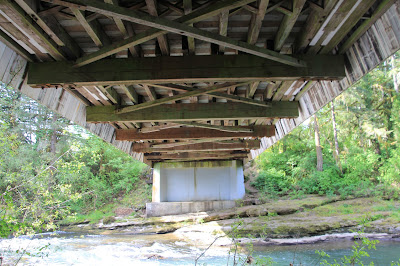 All of this has led bridge designers and public works officials to look for new ways to upgrade, to rehab, Oregon’s covered bridges while meeting the requirements of the traffic system AND honoring history.  That’s a fine balance.  One method, an easy method, would be to replace the floor system of a covered bridge with steel or even concrete, transforming the truss into what would amount to a decorative feature.  Nobody wants to do that (though there are many many covered bridges with concrete approach spans in Oregon…. There was a time when the approaches weren’t considered historic at all).  Another method is to replace the original timber elements with new timbers, up-sized to increase capacity, but that too changes the character of the bridge, even where such material is available (YOU try to find a 20” x 18” timber beam 60’ feet long!).  In some cases original timbers can be strengthened by post-tensioning, the installation of small steel cables or rods that tighten the truss and increase its carrying capacity.

But the most typical method, at least of late, is to replace damaged members (typically floorbeams and stringers that are below the roadway) with glu-lams, laminated wood that is matched in dimension to the original feature.  Glu-lams are just little pieces of wood, usually 2x, stacked, or glued (laminated) to create a single, larger, member.  Because of the stacked lamination and the multiple grain patterns, glu-lams actually carry more load than a single, solid, timber of the same size.  Of course replacing original, solid, timber elements with glu-lams is a change to the original design, justified to keep the bridge standing perhaps, but still a change.  There are differing opinions, from a technical standpoint, about whether that change is appropriate or not.  I don’t think most people even notice, but maybe that’s just wishful thinking.
Posted by G. Kramer at 7:16 AM