Beginning in 1990-1991, I have had a connection with Camp White, the WWII-era US Army cantonment that was built in the Agate Desert, north of Medford, Oregon.  Camp White was constructed in 1942 to train US infantry troops.  Covering more than 70 square miles, its 1400 buildings were mostly built of wood.  More than 100,000 troops were trained at the camp and the base was the second largest city in Oregon at the time.  100s of babies were born here, the valley’s first large contingent of African-Americans arrived, and there was even a German POW camp near the end of the fighting.  By 1946-47, most of the camp buildings were being dismantled for parts, or moved to serve as schools, churches, and other uses.  Not much remained. 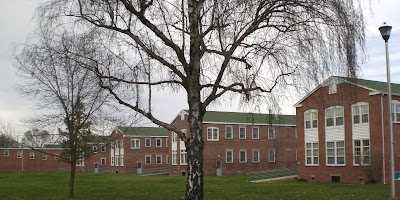 The Camp White Station Hospital, however, was built of brick, what the local leaders of the time called “permanent construction.”  The Rogue Valley, for all its independent bluster discovered that having a major federal presence in the valley was good for business and, with the end of WWII they were loath to let it evaporate.  Medford and Jackson County used political muscle (in the form of Wayne Morse) to, um, convince a foot-dragging Veterans Administration that Camp White would make the perfect location for a veterans facility.  The VA, from the start, said the Camp White Station Hospital was too big, too remote, and would be too expensive to operate.

Fast forward to 1991, the 50th Anniversary of WWII, and Camp White was celebrating almost a half century of service as the White City Veterans Administration Domiciliary, the “Dom” in local parlance.  Renamed Southern Oregon Rehabilitation Center & Clinics, the Camp White Station Hospital and its lovely grounds continue to provide services to returned soldiers and the VA presence remains an important part of the valley.  The huge two-story brick buildings of the station hospital, most connected by an amazing series of internal hallways, are arrayed in military-like formation, neatly in rows and rows. 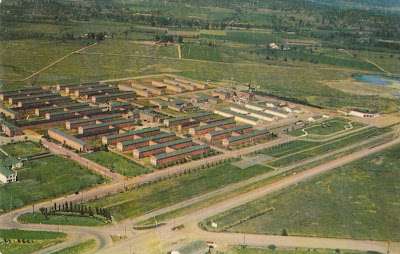 In the mid-1990s the Camp White Station Hospital was evaluated for historic significance in connection with an ODOT-funded widening of Highway 62.  Later the hospital was the subject of both a detailed survey of its 50+ structures and the development of a Manual for Built Resources.  Now, as the result of the Department of Veterans Affairs long-range plan to provide improved facilities at the site, we’re again in the process of the evaluating the resources at Camp White, determining which, if any, are individually eligible for listing on the National Register of Historic Places.  Many will likely be replaced by newer, and more efficient, structures, still arrayed in the neat little rows that personify the camp.

In 1991, in Camp White: City in the Agate Desert, I wrote of the legacy of Camp White and the station hospital, really the only “built” elements of the camp that remain.  “Nothing so large, so monumental in scope, can be measured solely by its remnants, no matter how impressive.  The true heritage of Camp White is the change that it brought.”   That is still true, seventy years after the first construction at Camp White began.  We are just starting this new evaluation project at SORCC, but I think it's pretty likely that at least some of the hospital buildings are going to prove eligible for listing on the National Register.  Call it an educated guess.
Posted by G. Kramer at 7:24 AM