Next week, working with Tama Tochihara, we’ll start the fieldwork for a reconnaissance level survey of the Summit-Fairmount neighborhood in Medford, Oregon.  This is an early residential district in west Medford with an estimated 1000 homes scattered over about 40 blocks.   A quick drive through last week showed that the majority of the homes are pre-WWII and most of those are pre-WWI.  This makes sense, since most the area was platted into additions to the city in the decade between 1900 and 1910.  That’s an important ten year period in Medford’s history, generally known as the “the Orchard Boom.”  Inspired by the arrival of the railroad, improved cold-storage technology that allowed long-distance fruit shipment, and an incessant drum beat of promotion, Medford became the center point of rapid growth in pear, apple and peach orchards.  Between 1900 and 1910 the city’s population exploded, growing more than 400% and lauded as the third fastest growing city in the United States. 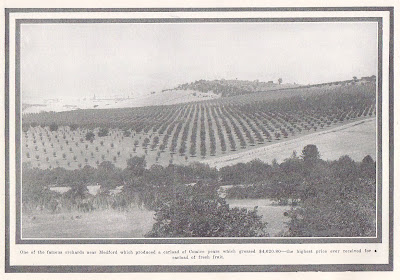 Medford’s Commerical Club (a precursor to the modern Chamber of Commerce) led the charge of “boosterism” in support of the city’s growth.  They published maps, and brochures, and most notably well-illustrated pamphlets and booklets (often through the Southern Pacific Railroad) to attract “Settlers” to the valley.  Orchards were laid out, many purchased by eastern money, and downtown Medford grew to provide services.  Areas like Summit-Fairmount were platted and hundreds of new homes were built to house the newcomers and the workers that flocked into the area.  The small additions in Summit-Fairmount, many only a block in size, represent a virtual who’s who of early Medford gentry.  Ray Toft, W. H. Canon (who would become Mayor), Warner, Wortman, Stewart, Purdin, Page and Palm, among others, all were involved various projects in this new part of the city.  Most have fairly prosaic names (the Anderson-Toft Addition, the Page Addition) but at least one, The Bungalow Addition, provides an indication of the times.  As might be expected there is a school, non McLaughlin Middle School, and a few other institutions scattered among the blocks, all within walking distance of downtown. 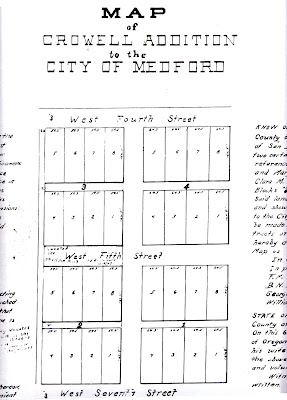 I haven’t done a survey for awhile and, at least at this point, am somewhat agog about the ways in which new technology has made this so much easier.  We used to take film photos, and try to keep them organized with roll numbers (not to mention bracketed exposures).  Digital cameras pretty much ended that.  And we used to have to use all sorts of ungainly mapping, trying to transform reality into something that could fit in your hand, in the field, or on your desk, when you were sorting it all out.  Now, with GIS and low-elevation aerial photos (THANK YOU to the City of Medford!) that information fits neatly into an 11x17 binder filled with accurate and up-to-date images.  Standing on the sidewalk with a clipboard and camera is still a part of the deal, but I’m impressed with how much more technology we can now bring to the project.

Soon we’ll have photos, and some preliminary information about construction, estimated dates and in some cases perhaps a little history, to start to make sense of these early neighborhoods.  I expect we'll have a good share of Bungalows too.  The City is already receiving some positive comments from area residents, long curious about the history of their homes and neighborhood.  Over the next few months, there will be more information for what ought be a great discussion.
Posted by G. Kramer at 8:08 AM