Littrell Building, Medford...Pieces of the Past


The Littrell Building, which stood at the corner of 6th and Bartlett in Medford’s downtown historic district, was designed by Frank Chamberlain Clark and built by Elmer Childers for local investor John Tomlin in 1936.  Its original tenant, a Safeway market, occupied the prominent corner volume until 1945 when E. A. Littrell purchased the building and moved his auto parts company there.  Littrell expanded to the east, doubling the space and matching the design.  The company occupied this corner for more than four decades. 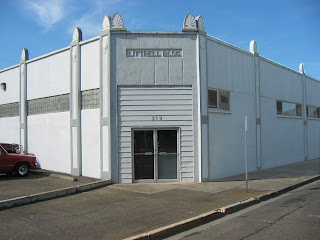 Next, Lithia Auto purchased the Littrell Building and used it as part of their downtown service complex.  In 2006, with funding from the Medford Urban Renewal Agency (MURA), Lithia undertook a façade renovation and brought the structure back to some of its original cool design, painting the engaged columns and the nifty shield-like finials. I think they even won an award. 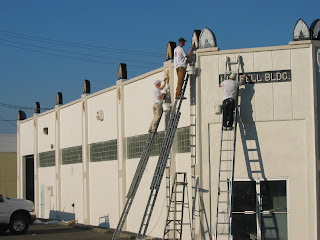 Alas, as Lithia began to design its new corporate home, and the adjacent development and park blocks that are to be known as “The Commons,” in downtown Medford, the Littrell Building was demolished.  Lithia agreed to keep the finials (and the sign block) and will use most of them as landscape elements in the new park, along with some interpretative material on this history.  They also plan to keep the “arch” from the old Greyhound Bus Depot (1949), a great Streamline Moderne building that was designed by Clark’s partner, Robert Keeney.  The future of that, unfortunately, is somewhat up in the air, but I’m hopeful that vision will out and the restored arch will remain as part of the design.  I imagine there will be more on that later. 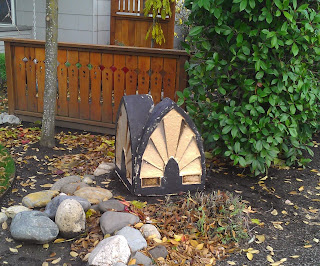 Anyway, some of the finials turned out to be extras and I was pleased to be able to save two of them.  They are happily on display as yard art….not a perfect preservation solution by any means, but certainly better than the dump, and surely mitigated by the fact that the majority will be restored and retained in the new Commons park.  These little curiosities, I think, serve a vital role for those times when a building can’t be otherwise saved.  They make people ask questions…and they remind us that things, even parts of things, are worth saving and have value.  In the meantime, if you know anybody that wants a three-ton 48" x 96" or so 8" thick chuck of concrete that proudly proclaims "Littrell Bldg." let me know.
Posted by G. Kramer at 10:13 AM