Jackson and Roosevelt, a sad situation in retrospect

A comment on another posts asks "what's up with the photos of Jackson School?" that run in the sidebar. Two years ago I was involved with an unsuccessful effort to save the historic Jackson and Roosevelt school buildings in Medford. These schools, built in 1911 and each a landmark anchor in a neighborhood named after them, were both built of brick with fine entry details. Neglected, and much added onto over the years, they were in need of work but had, as we say, "good bones." And they were both loved by many and were classic examples of that dying breed, "the neighborhood school."

The School District, 549C, and Dr. Phil Long, their superintendent, had secured $189 million in bond funding from the generous voters of Medford, promising to rebuild these structures, along with major improvements to most of the other schools and construction of a new high school to replace South. In the Summer of 2007, the day after school closed, 549C summarily closed both Jackson and Roosevelt, claiming that the brick was faulty and beyond repair, creating a eminent hazard to children. This was, frankly, a lie. They had no testing upon which to base that claim and in my discussions with Dr. Long about the issue he blandly admitted that the District simply didn't want to operate a three-story building. "They just don't work for us, as a school," he told me. 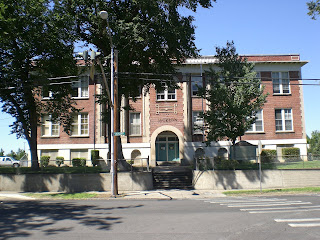 In typical political machination, still without any testing, 549C came up with a silly retrofit cost from an engineer unfamiliar with structural rehab. I have never seen so much concrete and steel inserted into a structure without reason in my career. What a surprise the costs were far more than demolition and new construction. Then they announced that cost over-runs at the new high school would require that neither Jackson or Roosevelt ever be rebuilt. (Funny, but that was their original goal, before election polling showed that the bond wouldn't pass if Jackson and Roosevelt were eliminated. Parents in both those neighborhoods, assured that their schools would be retained, hit the streets and got out the vote. The bond request passed by a mere 300 or so more "yes" votes than "no.")

The group that I was involved with, Save Medford Schools, shifted (wisely) to fight to keep schools on the Jackson and Roosevelt sites as the neighbors were promised. I continued to push for release of the brick study (which I had pushed 549C to commission during the Summer, but which 549C refused to publish...guess why?) and accurate cost justification that showed rehab was more expensive than demo and rebuild. Of course, the day they released the brick study, which of course found the bricks were fine, they also announced a new plan to rebuild Jackson and Roosevelt anyway, with money that came from their over-estimate of the repair of North High School. This effectively split the opposition, with parents who just wanted a neighborhood school on one side afraid to make any more waves and preservationists and fiscally minded community number-crunchers on the other, knowing that the District had cooked the numbers to get what they wanted to begin with.

Both Jackson and Roosevelt are now the site of new, two-story, buildings that will be opened next year. "Flagship High," as the monstrous suburban collector school the District is building at the edge of town has come to be known, is nearly complete. It fails to provide adequate theater and sport facilities, meaning the District will have to retain and maintain South to make it work and that students will have to drive or be bussed back and forth between the campuses (it is too far to walk).

The entire episode, as I testified to the 549C Board in January 2008 was a violation of the public trust, a waste of public funding, and the most egregious example of mismanagement on the part of an elected body I have ever been associated with in more than 25 years of public involvement. Had I been a Medford resident I would have led an effort to recall all of them, but not being so, I was effectively characterized as a "butt-inski" from Ashland.

The photos are of Jackson, in better days and during demolition. This week the Medford Landmark and Historic Preservation Commission announced its intent to nominate Washington School to the National Register. Dr. Long is 'considering' whether to support their effort. I am not holding my breath.
Posted by G. Kramer at 7:27 AM