Several months ago I reported on the announced transformation of Medford’s Holly Theatre into a fully restored performing arts center to be operated by the JPR Foundation, the same folks that run the successful Cascade Theatre in Redding, California.  I see this not only as a great opportunity for a long neglected building, the Frank Clark-designed Holly Theatre, but as a wonderful opportunity for downtown Medford.  A revitalized Holly Theatre will, in tandem with the existing Craterian Theatre, essentially double Medford’s night-time draw, support the growing number of high-quality eateries in downtown and, written broadly, give people another good reason to be in downtown Medford after the end of the business day. 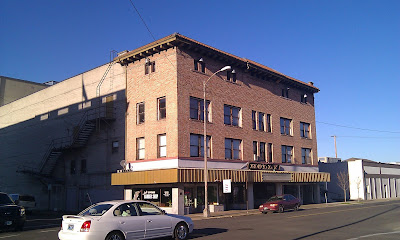 While the media has been quiet, except for the occasional doubting Thomas who still fear that Medford can’t support two theatres (nonsense), the JPR Foundation has not.  Most of the Holly’s interior has been cleaned up, as the previous owner removed things that had been stored there, creating an even more impressive space.  The Holly is, well, HUGE, with a single seating rake that once held more than 1200 seats.  The deep stage is largely empty, the leaking roof of the fly has now been repaired and the lighting is on, so you can appreciate the amazing interior.  JPR has been working on finalizing the application for a MURA Facade Improvement Grant, and expects to start work on recreating the huge 33-foot tall neon sign and the projecting marquee by late Fall.  Planning is underway for the major restoration effort, including new systems, improved building services, and, of course, an entirely accurate restoration and rehabilitation that will return the building to full function.  There are, of course, LOTS of decisions yet to be made, and lots of surprises yet to come, but the Holly is clearly on the road back.  Medford is very very lucky.
Posted by G. Kramer at 8:18 AM