For some years I have had multiple reasons to research, study, and write about the history of the Willamette Falls Industrial Area, a complex slice of Oregon at the Falls, lining both banks of the river between Oregon City and West Linn.  A few weeks ago I up there again, touring ‘round with a film crew for an upcoming documentary on one of Oregon’s most fascinating few acres. 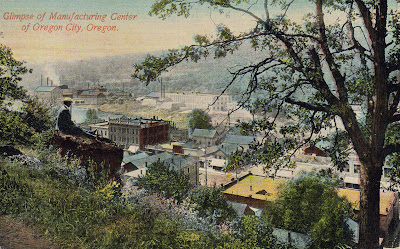 Famed as “end of the Oregon Trail,” this area was also the start of Oregon industry.  Water power was a key element in city building in the 19th century, a fact that wasn’t lost on John McLaughlin who started to carve a mill race out of the bedrock in 1829.  As the Oregon Territory grew, so did interest in the falls, which boosters soon envisioned as the Niagara Falls or the Lowell, of Oregon.  In 1865 one of Oregon’s first woolen mills opened here, followed by a pulp mill, and then, in 1873 a public-private partnership built the Willamette Falls Locks and Canal, breaking the shipping monopoly that had controlled freight shipments and stifled development for decades.  Another pulp mill, a more successful one, the Willamette Falls Pulp and Paper Company, started operation in 1883. 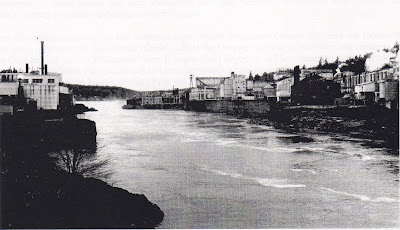 Beginning in the mid-1880s, an entrepreneur named Edward Eastham started to assemble property and water rights on both sides of the river with the idea of generating electricity to power Portland.  In June 1889 Eastham’s company, then called the Willamette Falls Electric Company, transmit DC power from the Falls to downtown Portland, a distance of 12 miles.  Not much to us, but historically significant as the first “long-distance” electrical transmission in the United States.  In 1890, having converted the plant, “Station A,” to Alternating Current, the company did it again, even though George Westinghouse, who manufactured the new AC generators, wasn’t sure it would work.  Five years later generation at the Falls was shifted across the river, to a huge new plant designed by Thomas W. Sullivan.  Dubbed “Station B,” that plant would provide virtually every watt of power in the Portland area for the next decade.

By 1906 the Willamette Falls Electric Company, along with more than 30 other companies, would become the Portland Railway Light and Power Company.  Today the company is known as Portland General Electric.  And Station B, renamed the T.W. Sullivan Hydroelectric Project, still produces power at the Willamette Falls.  It’s the oldest continuously operated hydroelectric plant in the country.
Posted by G. Kramer at 7:00 AM